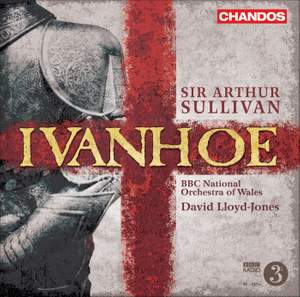 We can at last hear what Sullivan conceived - and it's impressive...It deserves the first-rate performance it receives from David Lloyd Jones, a worthy stand-in for Hickox, working with an excellent... — BBC Music Magazine, April 2010, 5 out of 5 stars More…

Act I Scene 1: Each day this realm of England faints and fails (Cedric, Men)

Act I Scene 1: Is she not fair? And she is rich withal (de Bracy, Brian, Men)

Act I Scene 2: Good Palmer, thou didst speak of one I knew … (Rowena, Ivanhoe)

Act I Scene 3: Will there be no more fighting? (Sopranos, Chorus, Friar, King, All)

Act I Scene 3: Chorus: Plantagenesta! (All)

Act II Scene 1: There is a custom in the East (King, Friar)

Act II Scene 1: And now for combat! Where's this friend of mine? (Friar, King, Locksley, Chorus)

Act II Scene 2: Will not our captor dare to show his face? (Cedric, de Bracy, Rowena)

Act II Scene 3: What sound is that? (Rebecca, Brian)

Act III Scene 1: Ah, would that thou and I might lead our sheep … (Rebecca, Ivanhoe)

Act III Scene 1: But hark! what sound is in mine ear? (Ivanhoe, Rebecca)

Act III Scene 1: How canst thou know what pain it is to lie … (Ivanhoe, Rebecca, Soldiers, Brian, Outlaws, Ulrica, All)

Act III Scene 3: It shall not be (Brian, Grand Master, Rebecca)

‘It will be an historical work, and it is the dream of my life. I do not believe in operas based on gods and myths. What we want are plots which give rise to characters of flesh and blood, with human emotions and human passions. Music should speak to the heart and not to the head…’ Sullivan back in 1885 with his ideas for Ivanhoe.

Ivanhoe, perhaps Sir Walter Scott’s most popular novel, was the perfect choice for historical opera and launched D’Oyly Carte’s ambitious English Royal Opera (now home to the Palace Theatre), where this romantic opera of three hours – ran with a double cast in one of London’s largest and most expensive theatre, on consecutive nights, for 155 performances, one of the most extraordinary runs ever achieved by any opera. In 1891, anyone in London wishing to experience some music would have had a remarkable choice. Ivanhoe was playing at the Royal English Opera, The Gondoliers was still drawing the crowds at the Savoy, and there was a performance of The Golden Legend at Covent Garden. It is hard to think of another musical personality in the history of British music, other than Handel, who had dominated London in this way

The sheer breath and variety of Scott’s invention in Ivanhoe is astonishing, and it is one of the most significant operatic works to have originated in Britain. It was written when Sullivan was at the height of his powers, with his typical fluency in word-setting and mastery of orchestration, and it breathes his natural empathy and humanity. Sullivan’s career was, by any standards, an extraordinary one, and this was its zenith.

This is the first professional commercial recording of Ivanhoe and features a cast, including Janice Watson, Toby Spence, Catherine Wyn-Rogers and Geraldine McGreevy. Conductor David Lloyd-Jones who has previously conducted Sullivan works makes his debut with Chandos. The work is dedicated to Richard Hickox who was instrumental in making this recording.

We can at last hear what Sullivan conceived - and it's impressive...It deserves the first-rate performance it receives from David Lloyd Jones, a worthy stand-in for Hickox, working with an excellent cast.

From the lively pomp of the jousting scene, with its brilliant double chorus, to moments of exquisite tenderness and passion, to thrilling battles and powerful drama, this recording makes a compelling case for a monumental work that deserves a modern audience.

That this first fully professional recording so clearly outclasses two previous semi-professional efforts is due above all to David-Lloyd-Jones's dramatic pacing… The three key roles are well cast. Toby Spence admirably balances heroic and lyrical demands... James Rutherford as Sir Brian de Bois-Guilbert and Geraldine McGreevy as Rebecca combine to bring the most out of Act 2, Scene 3 - the opera's musical high point.

Sullivan’s tuneful score makes for pleasant listening in this recording, planned for the late Richard Hickox, but stylishly conducted by David Lloyd-Jones. A fine British cast is headed by Toby Spence and Geraldine McGreevy, with James Rutherford as the lustful baddie.

Toby Spence is an impeccable Ivanhoe opposite Janice Watson's aristocratic, if effortful Rowena. But it's Geraldine McGreevy and James Rutherford, astonishing as Rebecca and Brian, who will really sweep you away.

Here at last is a recording...that makes the best possible case for the opera. David Lloyd-Jones conducts with an ideal balance of swagger and lyricism...Anyone who enjoys the serious side of Sullivan, as in The Yeomen of the Guard, will find much to enjoy here