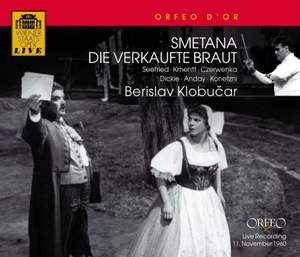 [Klobucar] knows how to weight Smetana's sometimes Germanic scoring more towards Liszt than Brahms...Irmgard Seefried would be the greatest interpretative Marenka on disc if she was singing the... — Gramophone Magazine, June 2010 More…

Smetana's The Bartered Bride, performed in German, it has long been a regular part of Vienna's mainstream operatic repertory. In 1960 this production was captured by Austrian Radio in a performance that immortalised the interpretations of the original principals from 1959.The cast was headed by Irmgard Seefried, a great favourite with Viennese audiences.At the time of this recording she could already look back on a stage career lasting 20 years, and yet she had retained the youthful freshness necessary for Marie/Marenka.The other half of this dream couple was Waldemar Kmentt as Jeník, or Hans, one of the roles with which the Austrian tenor was rightly most closely associated.The tragicomedy of his stuttering stepbrother is well caught by Murray Dickie avoiding buffo excess.The self-infatuated and vainglorious marriage broker Kecal is entirely plausible when the role is played by another Viennese operatic institution, the distinguished Upper Austrian bass Oskar Czerwenka.The smaller roles are also cast from strength by singers of the calibre of Hilde Konetzni, Rosette Anday and László Szemere, all of whom milk their brief scenes for all that they are worth. A lively and yet always well-disciplined performance is further guaranteed by the Chorus and Orchestra of the Vienna State Opera under the direction of Berislav Klobucar, who, often criminally undervalued, presided genially over countless repertory performances in Vienna.

[Klobucar] knows how to weight Smetana's sometimes Germanic scoring more towards Liszt than Brahms...Irmgard Seefried would be the greatest interpretative Marenka on disc if she was singing the role in Martian - she even finds a special voice for the Act Two duet when she tries putting Vašek off marriage.