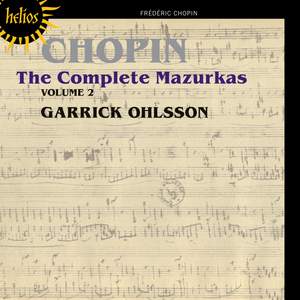 Not only does he catch the rhythm, but his feel for nuance and colour misses no element of Chopin’s infinite imagination, and the balance of earthiness and elegance is well-nigh ideal…Ohlsson... — BBC Music Magazine, February 2010, 5 out of 5 stars More…

Chopin: Mazurka in A minor KKIIb / 5

Chopin: Mazurka in A minor KKIIb / 4

It has been said that the mazurkas are the soul of Chopin, revealing facets of his personality and emotions more directly than any other of his compositions. Of all the forms in which he wrote throughout his career, Chopin turned most frequently to the mazurka, so that the whole collection forms a kind of musical diary, one in which he could confide his most private thoughts, and which, coincidentally, charts his progress as a composer. His modulations, harmonies and use of counterpoint become (generally) more adventurous with each new set. Some later examples verge on the experimental.

Chopin preserved the various quintessential elements of this Polish folk dance—the sudden changes of emotion, for instance, or the drone bass of the bagpipes—and, as with the waltz, polonaise and nocturne, elevated an established form into the realm of high art. They are startlingly original—even eccentric sometimes—for the form inspired in him a freedom to explore without inhibition. For all their brevity (few last longer than four minutes) and the variations based on a simple ABA structure (sometimes with a coda), these miniatures have the same narrative cohesion and depth as the more extended Ballades.

Volume 2 of the complete mazurkas combines the four late sets of Opp 50, 56, 59 and 63, followed by fifteen individual dances composed between 1826 and 1849. Though Chopin left instructions for them to be destroyed, the two sets published as Opp 67 and 68 were issued after Chopin’s death in 1855 by his friend Julian Fontana with the approval of the composer’s family.

The Op 50 set and the three groups that follow share similar structures: an imposing opening dance succeeded by a simpler one and culminating in a contrapuntal finale. On average, they are longer than the earlier mazurkas with more development and use of counterpoint (Op 50 No 3 in C sharp minor and Op 56 No 3 in C minor, for instance, reflect Chopin’s fondness for Bach and the Well-Tempered Clavier). And are they bagpipes we hear in Op 56 No 2? The set was dedicated to his Scottish pupil Catherine Maberly, a friend of his benefactor Jane Stirling.

If the three mazurkas of Op 59 (1846) are less ambitious in scope, they seem more spontaneous and at ease, yet with some of Chopin’s most daring modulations (No 1 in A minor) and beautiful melodies (No 2 in A flat major). Also present, and not mentioned hitherto, is another element used frequently throughout the mazurkas—the (sometimes obsessive) use of repeated patterns, as in the well-known final mazurka of the set in F sharp minor.

Op 63 was the last set that Chopin published (1847). It is dedicated to the Countess Laura Czosnowska from Warsaw, the flirtatious friend of Chopin’s sister Ludwika. No 1 is certainly vivacious (note a repetitive figure again in the central section). No 3 in C sharp minor is justly celebrated, its poignant melody cleverly worked as a canon in the coda.

Of the Opp 67 and 68 mazurkas, the best are Op 67 No 4 in A minor (composed in 1846) and Op 68 No 4 in F minor, to which Fontana affixed the following: ‘Cette Mazurka est la dernière inspiration que Chopin ait jetée sur le papier peu de temps avant sa mort; il était déjà trop malade pour l’essayer au piano.’ (‘This Mazurka is the last inspiration that Chopin committed to paper shortly before his death; he was already too ill to try it out on the piano.’)

Wilhelm von Lenz recalled in 1872 the experience of hearing Chopin play his mazurkas: ‘There his playing was truly at home; in them resided Chopin’s originality as a pianist.’ Berlioz agreed. As early as December 1833 (in Le Rénovateur), he was aware of this unique style of playing. ‘Virtually nobody but Chopin himself can play his music and give it this unusual turn’ with ‘a thousand nuances … which are impossible to convey by instructions. There are unbelievable details in his Mazurkas; and he has found how to make them doubly interesting by playing them with the utmost degree of softness, piano in the extreme, the hammers merely brushing the strings, so much so that one is tempted to go close to the instrument and put one’s ear to it as if to a concert of sylphs or elves.’

Chopin played his mazurkas with a rubato so free that some took it to be erratic timing. Meyerbeer called on Chopin one day while he was playing the Mazurka Op 63 No 3, took a seat and commented that Chopin was playing in 2/4. No, Chopin insisted, he was playing in 3/4. No, countered Meyerbeer calmly, beating time, it’s in 2/4. Chopin, who normally never raised his voice, is then reported to have screamed in rage at the suggestion he was playing in anything other than strict time. The two composers held their own and, sadly, parted on bad terms. On another occasion some years later, Karl Halle (better known subsequently as Sir Charles Hallé) made the same observation as Meyerbeer, suggesting that a particular mazurka appeared to be written in 4/4. He obviously caught Chopin in a better mood, for while Chopin initially denied that he was playing in 4/4, in the end had to admit that Halle was right, laughing that it was ‘the national character of the dance which created the oddity’.

Not only does he catch the rhythm, but his feel for nuance and colour misses no element of Chopin’s infinite imagination, and the balance of earthiness and elegance is well-nigh ideal…Ohlsson brings a phenomenal variety of expression and depth of characterisation to these exquisite miniatures - an approach that manages to capture the folk elements of the composer's style to quite hypnotic effect.