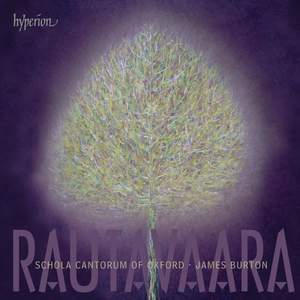 From the vibrancy of the very first track, the lively imagination of Rautavaara's writing for voices, the pungent palette of the Schola Cantorum of Oxford, and the clarity and spatial excitement... — BBC Music Magazine, April 2010, 4 out of 5 stars More…

Rautavaara: Our joyful'st feast 'When icicles hang by the wall'

Rautavaara: Halavan himmeän alla - In the Shade of the Willow

Einojuhani Rautavaara’s reputation as one of the greatest living Finnish composers is assured. Once Sibelius’s protégé, over his long career he has achieved success in a great number of musical genres, particularly that of opera. But it is his choral works that have made him a household name, both in his native country and internationally. Recorded here is a fascinating selection of works, including the Suite de Lorca—one of the most popular Finnish choral works of all time—and all demostrating the unique style forged by the composer on his travels through the musical fashions of the twentieth century. His rich and sonorous neo-Romantic textures have a steely modernist edge and the resulting voice is one that is deeply attractive and approachable, yet endlessly captivating. He sets texts of great passion and complexity and does not hold back from expressing deep emotion.

Rautavaara’s music is performed by the Schola Cantorum of Oxford, described in The Times as ‘Oxford’s classy intercollegiate choir’ and highly acclaimed for their two previous recordings for Hyperion. The choir is conducted by James Burton.

From the vibrancy of the very first track, the lively imagination of Rautavaara's writing for voices, the pungent palette of the Schola Cantorum of Oxford, and the clarity and spatial excitement of this record are immediately apparent.

…Suite de Lorca "one of the most popular Finnish choral works of all time". …Schola Cantorum's powerfully shaped new account is as vibrant and accomplished as any. …Die erste Elegie, one of Rautavarra's finest works, here given a performance of touching fervour. Schola Cantorum's accounts, splendidly directed by James Burton, are all first-rate with a spacious, clear recording.