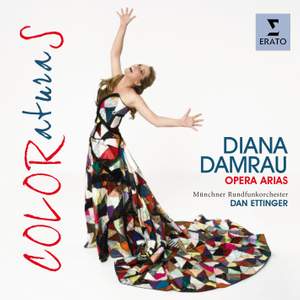 Diana Damrau is ice and fire. With a formidable technique allied to effortless artistry, there is it seems nothing that she cannot do, certainly in the vocal fireworks department. …it's her... — BBC Music Magazine, February 2010, 5 out of 5 stars More…

Stravinsky: The Rakes Progress: Silently night...I go to him

Bernstein: Candide: Glitter and be Gay

The multi-faceted German coloratura soprano, who has been described as “the Meryl Streep of classical music” shows her vocal and dramatic range with this collection of arias from the 19th and 20th centuries. The repertoire ranges from Rossini and Verdi to Stravinsky and Bernstein, from comedy to tragedy and covers four languages: German, Italian, French and English. It includes Zerbinetta’s marathon coloratura aria from Ariadne auf Naxos, one of the operas which spearheaded Damrau’s international career.

“Damrau has … strong opinions on the use of coloratura for dramatic effect,” wrote Opera News in an interview with the soprano. “Unlike some singers of previous generations, who were encouraged to cut back on the vocal garni by conductors who found the flourishes suspect, Damrau employs embellishments to emphasize the impact of language ….What's more, her Italian diction is superb, something that cannot always be said for Central and Eastern European artists. ‘Oh, I'm so glad to hear that,’ she says, ‘because I have a facility for languages, and I work very hard to communicate well.’ Whether Rosina [in Il barbiere di Siviglia] is expressing delight over Almaviva's furtive caress or anger over his imagined betrayal, Damrau deploys her clarity of speech to vivid effect; she points out that in ‘Una voce poco fa’,’ [featured on this recital] the word vipera is key — the girl knows full well she can be a viper. Later on, the bite she puts into the word traditore, for example, cuts to the quick.”

When Damrau performed Rosina at the Met, The New York Times wrote that: “the lovely German coloratura Diana Damrau was absolutely dazzling here. Interpolating extra-high roulades into the music, she brought her bright, clear and very sizable voice to the role, singing with impeccable accuracy and delightful impishness. This Rosina was no innocent. You immediately believed her when she explained in the touchstone aria ‘Una voce poca fa’ that though for the most part she is a docile and obedient thing, when crossed in love she becomes a viper.”

Donizetti also appears in this recital, with an aria from Linda di Chamounix. Damrau took on the challenge of following Natalie Dessay as Lucia di Lammermoor at the Met. “Ms. Damrau dispatched the passage-work, trills and top notes with aplomb,” wrote the New York Times. “Her sound was warm, plush and clear ... That Ms. Damrau executed the Mad Scene’s spiraling vocal roulades so accurately and held sustained tones with such penetrating steadiness lent a quality of eerie control to Lucia’s madness. And her gleaming top notes filled the house.”

“Diana Damrau is the most thrilling high soprano of our day.” The Observer

“The point with Damrau ... is that she’s fearless, impressively unpredictable, and about as far as possible from being a ‘production line’ soprano.” Classic FM magazine

Diana Damrau is ice and fire. With a formidable technique allied to effortless artistry, there is it seems nothing that she cannot do, certainly in the vocal fireworks department. …it's her Gilda where everything melds into perfection. The lightly coloured tone in the introductory phrases to 'Caro nome' proclaim her innocence; the vocal slide into the flute solo that introduces the aria sings of her love for the Duke; and by the time you arrive at the tender trill on the aria's penultimate phrase and the final effortlessly sustained note you're just about in love yourself.