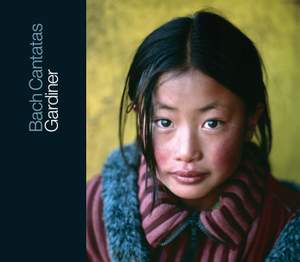 These half-dozen masterpieces offer as an alluring a conspectus of Bach's sublime inspiration as I can think of. Gardiner and his musicians are on splendid form. In BWV 61 bass Dietrich Henschel's... — BBC Music Magazine, January 2010, 5 out of 5 stars More…

The illustrious, multi-award winning Bach Cantatas series on SDG continues with volume 13 in the series. It features Cantatas for the first and fourth Sunday in Advent and was recorded live in December 2000.

We join John Eliot Gardiner, the Monteverdi Choir and English Baroque Soloists on their Bach Cantata pilgrimage for a concert of Bach’s Advent cantatas, performed in the largest of the Romanesque churches in Cologne, St. Maria im Kapitol (St. Mary in the Capital).

Besides the festive allure they have in common, all three of Bach’s surviving cantatas for Advent (BWV 61, 62 and 36) display a sense of excitement at the onset of the Advent season. This is a time of anticipation and waiting, and an opportunity for congregations to turn away from all those self-absorbed feelings of guilt, fear, damnation and hellfire that dominated the final Sunday of the Trinity season. This sense of having at last turned a corner is summed up in the radiantly benign accompagnato for soprano and alto ‘Wir ehren diese Herrlickkeit’, the penultimate movement of BWV 62 Nun Komm, der Heiden Heiland (Come now, Saviour of the Gentiles). The successive stages of Advent and the different perspectives these give on Jesus’ incarnation are perhaps most clearly marked in Bach’s early version of BWV 61 Nun komm, der Heiden Heiland. The programme ends with BWV 36 Schwingt freudig euch empor (Soar joyfully aloft), a large-scale work divided into two parts, the first of which would have been performed before the sermon, the second afterwards.

The final European leg of the year-long pilgrimage takes us to the atmospheric Michaeliskirche in Lüneburg where we join John Eliot and his musical forces in a concert of three of Bach’s most gripping church cantatas. The programme begins with BWV 70 Wachet! betet! betet! wachet! (Watch! pray! pray! watch!). We then hear one of Bach’s earliest cantatas, BWV 132 Bereitet die Wege, bereitet die Bahn! (Prepare the way, prepare the path), an intimate work scored for four voices, oboe, bassoon, strings and continuo consisting of two recitatives, three arias and a final chorale.

The concert ends with BWV 147 Herz und Mund und Tat und Leben (Heart and Mouth, Deeds and Life), the best known of Bach’s reworkings of an earlier Weimar cantata. The pre-Christmas excitement is captured in the glorious opening chorus by the fanfare-like opening section for orchestra.

These half-dozen masterpieces offer as an alluring a conspectus of Bach's sublime inspiration as I can think of. Gardiner and his musicians are on splendid form. In BWV 61 bass Dietrich Henschel's tenderly declaimed direct speech from Revelations, 'Behold, I stand at the door and knock' is affecting, as is soprano Joanne Lunn's beautifully paced and fervently imploring continuo aria. Tenor Jan Kobow and Henschel both excel in their arias in BWV 62 while Lunn and William Towers as witnesses of the Nativity bring a pleasing blend of intimacy and wonder to their accompagnato.

The fluency and dramatic immediacy of Wachet! Betet! (BWV70) is telling indeed… Most impressive is the panache and finely judged pacing of the subsequent movements - in which Henschel is again supreme. BWV132 receives an exceptional performance, the line led by soprano Brigitte Geller and Henschel with real class, and so too the ubiquitous Herz and Mund (BWV147). It is as powerful and effective a performance as you're likely to hear of a perennial favourite.

Gardiner's vivid commitment carries through to the joyful performances. This ongoing recording project ranks as one of the musical events of the decade.