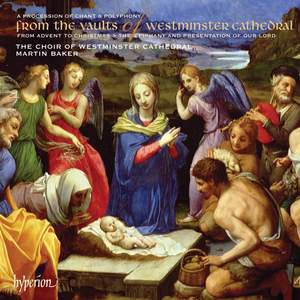 Offer, From the vaults of Westminster Cathedral

Festive albums from Ex Cathedra, The Choir of Westminster Cathedral, the Bournemouth Symphony Orchestra, and the Choir of Gonville & Caius College Cambridge.

A century ago, Richard Runciman Terry re-introduced the wonders of the Renaissance into liturgical polyphony and placed Westminster Cathedral Choir at the pinnacle of the art. Terry was a musical pioneer whose work as Master of Music at Westminster Cathedral between 1902 and 1924 is legendary. The musical roadmap that Richard Terry charted for London’s new Roman Catholic cathedral remains largely unrevised today. Plainchant and Renaissance polyphony are the bedrock of Westminster Cathedral’s sung liturgy—early music is the root from which the cathedral’s musical endeavours have branched for over a century. Also, from Westminster Cathedral’s earliest years, alongside the fascination with early vocal repertory, composers have been commissioned to contribute to the canon; when they have done so the choir’s antique musical diet has frequently been at the forefront of those composers’ imagination.

This disc is a homage to Terry’s work: a procession through a particularly rich section of the church’s year which perfectly illustrates the changing glories of the liturgy.

Epiphany brings Monteverdi's Messa a 4 da cappella, whose polyphonic complexities elicit a confidently assertive response from the choir, with fine internal balances between the voice sections.

Throughout, the choral singing under Martin Baker's direction glows resplendently, while still retaining its celebrated "continental" edge. Another tremendous plus is the exhilarating, splashy, dynamic and fiery improvisations dished up by Matthew Martin on the Grand Organ. Who could fail to be moved by the image of lolloping camels in his cinematic concluding Marche des Rois mages?