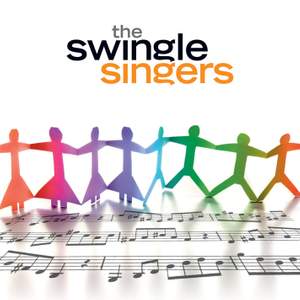 Parry, B: The Magic Flute - Overture

Lennon & McCartney: Fool on the Hill

Lennon & McCartney: Blackbird / I Will

trad.: The Star of the County Down [Ireland] (arr. Ben Parry)

The Swingle Singers may be said to combine a certain type of American music from the first part of the twentieth century with the culture of “old” Europe. Contrary to what one might imagine, this was originally a French group, founded in 1962, but directed by an American called Ward Swingle, who lived in Paris. The configuration of the group has never changed: eight singers (two each of sopranos, altos, tenors and bass-baritones) covering between them the whole of the vocal and “instrumental” range demanded by the adaptations or transpositions which, together with works created specially for them, go to make up their repertoire. The group drew on various sources of inspiration, Ward Swingle having been successively a member of the Blue Stars and Double Six in Paris. The latter group came into being in 1959 at the instigation of Mimi Perrin, herself a singer with the Blue Stars, as was Christiane Legrand, who became one of the soloists of the Swingles. Thanks to the technique of overdubbing, Double Six, comprising six voices, were able to reproduce in the studio the twelve voices usual with the great jazz bands – which explains their title. Texts, by Mimi Perrin, were in French. This is one of the basic differences between Double Six and the Swingle Singers, and one of the paradoxes about the latter, since Ward Swingle’s group adopts the configuration of a (double) quartet in the pure western (in fact, European) classical tradition, vocal as well as instrumental, while the lack of any articulated or “comprehensible” form of text aligns them more with the jazz of the beginning of the century, via the technique of scat singing. Ward Swingle’s intention, though, was not to compete with any American group, but rather to create an autonomous, original music genre, a free synthesis bridging the gap between one side of the Atlantic and the other.

Scat technique is said to have first appeared in 1926 while Louis Armstrong was recording Heebie Jeebies. After a first chorus had been sung, it seems the sheet of paper with the words on it fell off the stand, and so as not to interrupt the recording Armstrong created the genre by spontaneously resorting to a series of onomatopoeic utterances, the second syllable of the chorus being precisely “scat”. Every significant birth, as in the myths of antiquity, must have an official date, a before and after: in the event, it seems this particular “first” may have been preceded by others, though it remains incontestable that Armstrong was the most brilliant exponent of scat. The substitution of onomatopoeia for intelligible text seems in fact to have been practised from the start of the ’20s by some of the so-called Washboard Bands (the washboard being the poor man’s percussion in “early” jazz). At that time the voice was seeking to imitate the instruments (the opposite of what usually happens in jazz), not a difficult procedure and one which suited these little groups, in which scat-singing was often doubled with the kazoo. Scat later spread widely into other types of jazz – not only in America (with the appearance of the term “bebop” in a scat number in 1928), but also in France, with zazou (from Zaz, Zuh, Zaz by Cab Calloway, 1933) and scoubidou.

What could be more universal than this type of vocal music, which follows the example of purely instrumental music by freeing itself from the constraints of words and language? It is undoubtedly one of the most attractive aspects of the Swingle Singers’ originality that thanks to their stupefying perfection of rhythm and intonation they were able to take on such extremely diverse genres, notably in those areas where jazz and classical music became fused (in those days this was not yet referred to as “crossover”). Their first great success was an album devoted to arrangements of vocal, orchestral and organ works by J.S. Bach. In Bach Hits Back one can only marvel at their imitation of instruments by the voice – the first principle of scat – to the extent that one quite often wonders if one is hearing a voice or an instrument, as when the basses sing pizzicato: everyone remembers the Brandenburg Concerto No.3 or the Badinerie from Suite No.2. The original Swingle Singers went on until the ’70s; then in 1984 Ward Swingle settled in London, where a new ensemble was formed with the same configuration, the Swingles II or New Swingle Singers. The type of repertoire stayed the same, the Bach experiment being joined by a no less ambitious Mozart album – A Cappella Amadeus: the overture to The Magic Flute, the Turkish March, extracts from the Requiem, the “potted” Symphony No.40, and so on. If the exceptional virtuosity of the original group had also inspired contemporary composers, such as Luciano Berio, who composed Sinfonia with them in mind (they recorded it in 1969), the talents of the New Swingle Singers showed themselves to be worthy of their predecessors, as could be heard in a new recording of Sinfonia made in 1984 with Pierre Boulez and the Orchestre National de France.

The title of their third album, 1812, is of course a reference to the Tchaikovsky overture which closes the programme, balancing out the opening William Tell by Rossini. Between the two, the Swingle Singers weave their usual roundabout course, going from Debussy’s piano piece Clair de lune and Trois Chansons de France (poems by Charles d’Orléans), together with a song attributed to Henry VIII, to Lennon and McCartney – a different approach to melody, though perhaps not so far removed – as well as North American music: opera (an unforgettable Gershwin Summertime), Broadway (Stephen Sondheim) and TV series (Peter Gunn, 1958-1961, with music by Henry Mancini). The album entitled Around the World is a special case, in which the Swingle Singers sing traditional texts, while not abandoning the idea of an (entirely vocal) “instrumental ensemble”; strikingly varied, it tirelessly explores the limitless resources of scat singing. The loss of the universality inherent in “songs without words” is here made up for by the diversity of languages (albeit dominated by English). The spirit of the sources can be heard not only to survive but to be enriched, entirely in vocal terms, by the infinite variety of popular music – Andean flutes (Cachapaya), banjo (Country Dances), Jew’s harp (Waltzing Matilda) and so on. Previously well-known as explorers of the boundaries between the classics and jazz, here we meet the Swingle Singers at the crossroads between timeless scat singing and a repertoire which at the same time as it is completely rooted in place is also the most cosmopolitan imaginable.