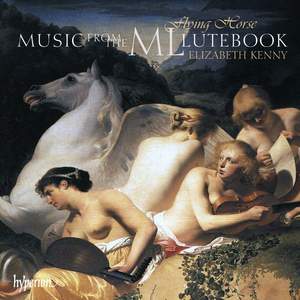 Music from the ML Lutebook

Johnson, R: Allmayne (Hit it and take it)

Mysterious doodles on a 17th-century manuscript provided Liz Kenny with the inspiration for this fascinating disc. The ownership of the ML Lutebook has been attributed to a number of court musicians from its discovery in 1912, but it was the name ‘Margaret’ occasionally scrawled throughout the copy which caught the contemporary performer’s imagination. Kenny writes that ‘this chimed with the train of thought that was beginning to focus on what and who these books were compiled for, rather than on any single composer who wrote them, and put it in line with other books belonging to Jane Pickeringe and Margaret Board (lute), Elizabeth Rogers (virginals), and Lady Ann Blount (singing), where a remarkable level of virtuosity was associated with private performance by women. There are plenty of great men and great tunes within its covers but ‘Margaret’ has remained in my mind over the years that I’ve been fascinated by the book’. The Flying Horse (track 24) is an anonymous piece that seems to sum up the spirit of the book, a ground bass spiced up with an exotic chord of A flat and an incitement to improvise. Works by Dowland, Johnson, Bacheler, Sturt and others summon up an exhilarating musical world influenced by the court, the theatre and the cries of the street, and where mansucripts, passed from hand to hand, became palimpsests of the perfomer’s own art.

Liz Kenny, arguably the greatest lutenist of today, performs this entrancing collection with an aplomb and flair that seems to directly channel those virtuoso performers who were handed the music with the ink still wet on the page.

…a unique snapshot of contemporary performances styles, with sober Elizabethan and early Jacobean danced and ditties dressed up in elaborate Baroque garb - rich in ornamentation, fashionably French. Elizabeth Kenny offers discrete yet highly responsive interpretations with feathery, fleet finger-work throughout, and both left- and right-hand embellishments sounding effortless and organic-subtle adornments to the music's architecture. ...a fine balance of scholarship, technology and first-rate performance.

The listener…able to savour the individual qualities of each work… marvelling not only at Kenny's acute sense of local colour, form and texture but also her considerable technical prowess, the latter especially obvious in the profuse ornamentation and extended divisions throughout.