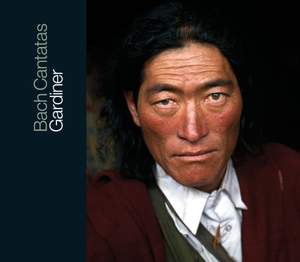 …the opening chorus of BWV 148… It's just the kind of piece at which the Monterverdi Choir surpasses its rivals, and the instrumental support from the English Baroque Soloists is splendid.... — BBC Music Magazine, November 2009, 5 out of 5 stars More…

Gardiner’s award-winning Bach Cantata series on Soli Deo Gloria continues with volume 9 in the series featuring Cantatas for the seventeenth and eighteenth Sunday after Trinity. Recorded live in October 2000. We join John Eliot Gardiner, The Monteverdi Choir and The English Baroque Soloists on their Bach Cantata pilgrimage in the spectacular dark brown gothic Allhelgonakyrkan (All Saints Church) in Lund.

The concert explodes into action as the long fanfare-like ritornello for solo trumpet and strings herald the opening of BWV 148 Bringet dem Herrn Ehre seines Namens (Give the Lord the Glory due his Name). This grand opening leads the way for the chorus to enter with a rousing delivery of the psalm verse, ‘Give unto the Lord the glory due unto His name; worship the Lord in the beauty of holiness.’ This is then followed by the chorale cantata BWV 114 Ach, lieben Christen, seid getrost (Ah, dear Christians, be brave), from Bach’s second Leipzig cycle. We then hear BWV 47 Wer sich selbst erhöhet, der soll erniedriget werden (Whoever himself exalteth shall be abashed) which opens with a mighty opening movement for chorus. The programme ends with the most instrumentally conceived of Bach’s double-choir motets, BWV 226 Der Geist hilft unser Schwacheit auf, (The Spirit Helpeth Our Infirmities). It is also the only motet composed by Bach for which a specific purpose is known – the funeral service of JH Ernesti, the rector of the Thomasschule in Leipzig.

We then travel to the Thomaskirche in Leipzig and open the programme with BWV 96 Herr Christ, der ein’ge Gottessohn (Lord Christ, the only Son of God). Next comes BWV 169 Gott soll allein mein Herze haben (God alone shall have my heart), the last and considered by many to be the most consistently beautiful of Bach’s Cantatas for solo alto. This is then followed by the superb choral cantata BWV 116 Du Friedefürst, Herr Jesu Christ, first performed on 26 November 1724. The choir then retreat to the very crucible where for the last twenty-seven years of his life Bach worked. They form a horseshow around his final resting place and sing a cappella what legend has identified as Bach’s very last piece, BWV 668 Vor deinen Thron tret’ ich hiermit, the so-called Deathbed Chorale.

…the opening chorus of BWV 148… It's just the kind of piece at which the Monterverdi Choir surpasses its rivals, and the instrumental support from the English Baroque Soloists is splendid. John Eliot Gardiner brings his accustomed fervour to the music, enlivening it at every turn. Altogether, this is one of the strongest releases in Gardiner's series so far.

…BWV148… includes the aria "Wo wird in diesem Jammertale", a model of the extended soul-searching tableau in which, here, the singer and obbligato flute are co-subsumed within a vale of sorrow. It is beguilingly delivered by tenor Mark Padmore and flautist Rachel Beckett, the highlight of the Swedish programme... an electrifying account of the Sinfonia of BWV169... heralds Bach's least celebrated but, arguably, most refined and mature alto cantata. Nathalie Stutzmann sails through each portion with her inimitable diction and plush allure.