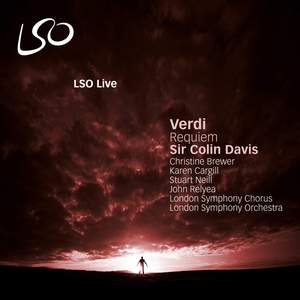 …Sir Colin conducts the Requiem with a judicious mix of fire and meditative calm; tempi never drag nor are they, in the reflective passages, metronome-quick. The work of the LSO Chorus is first-rate,... — Gramophone Magazine, October 2009 More…

Sir Colin Davis's series of choral masterworks continues with Verdi's Requiem, a work that Sir Colin has been conducting for much of his long career. It is also his second recording of Verdi's late works for LSO Live, having previously conducted the Grammy Award-winning recording of Falstaff in 2004. He is joined by four superb soloists, three of whom have appeared on Sir Colin's previous LSO Live recordings. Christine Brewer was the superb Leonore on Sir Colin's acclaimed recording of Fidelio; Karen Cargill and John Relyea appeared on Berlioz' L'enfance du Christ and Benvenuto Cellini respectively.Appearing on his first LSO Live recording is the outstanding Verdi tenor Stuart Neill. The Requiem was recorded in January 2009 at concerts dedicated to Richard Hickox who had been President of the London Symphony Chorus and studied with Sir Colin before his own successful career. The 'Agnus Dei' was particularly moving [not to mention in tune, ed] with the female soloists having an obvious rapport. LSO Live has recently released recordings of Haydn's Creation and the St John Passion by James MacMillan conducted by Sir Colin. His award-winning recordings of Sibelius's symphonies will be released in the Autumn as a 5CD box set. Other future releases include Valery Gergiev's recordings of Bluebeard's Castle and Mahler Symphony No 5.

"listen to the fire he generates, the wisdom, the precision and his grasp of the music's narrative … Davis located Verdi's heart right from the first bars. Whether sighing or seething, Joseph Cullen's massed troops were on exemplary form; I've not yet recovered from their full-throated onslaughts in the Dies Irae, delivered with cutting consonants and the heat of hellfire. What of the soloists? Here too we were blessed. Throughout, Davis shaped Verdi's tumult and song with the master's touch" The Times

"The greatest interpretations are often those where you are most conscious of the music and least aware of the conductor's will imposed on it. Such was the case with this remarkable performance … allowing us to experience to the full the nightmarish quality of Verdi's evocation of the Dies Irae, his deep compassion for the suffering, the flippant glory of the Sanctus, and the dreadful uncertainty with which the work closes" The Guardian

"When you are an octogenarian the prospect of another Requiem Mass might be regarded with some degree of circumspection. Unless, of course, you are Sir Colin Davis … Davis is still such a vigorous force for good in music: his clarity of purpose, his keen sense of weighting and rhythm (no one anchors music like he does), and his fervent love of great public utterances, make him the perfect candidate for big choral masterpieces … Quite marvellous" The Independent

…Sir Colin conducts the Requiem with a judicious mix of fire and meditative calm; tempi never drag nor are they, in the reflective passages, metronome-quick. The work of the LSO Chorus is first-rate, as is that of the LSO itself.

Davis, first and foremost, sees the Requiem as being driven by unresolvable inner tensions and ­paradoxes...Davis creates a sense of almost unendurable emotional uncertainty by reminding us that consolation is ­repeatedly proffered, only to be whisked away.