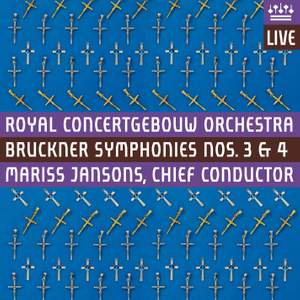 Mariss Jansons conducts the Third and Fourth symphonies with the Amsterdam orchestra in performances which showcase their lustrous string sound and richly glowing brass section.

Ever since the tenure of its chief conductor Eduard van Beinum (1945-59), the Concertgebouw Orchestra has cherished one of the greatest Bruckner symphonic traditions in the world. Mariss Jansons continues this performance tradition and under his baton, Bruckner has a warm, beating heart: his rhythms are not simply played, they are, above all, experienced.With this release of Bruckner's Third and Fourth Symphonies, Jansons and his Amsterdam-based orchestra add a new chapter to the RCO's impressive performance and recording history of Bruckner's works.

"That same sense of having found exactly the right pulse rate for the music was there from the start of the Bruckner too…chording was compact, timbres lean yet ripe, and rhythms rigorous and highly charged, particularly in the exuberance of the Concertgebouw's burnished brass. The orchestra's lustrous strings sang as one, bringing light and air to an adagio that can too often become suffocating. Jansons, typically, understood and felt not only every nerve within the score, but also exploited and made very much his own every second of his orchestra's own Bruckner heritage." The Times

…excellent sound, and… magnificent playing from the Royal Concertgebouw Orchestra…

Listening to these performances, I was reminded of Karajan's remark about the great Czech conductor Václav Talich: "He had a great genius for… drawing the orchestra together and controlling it as a single expressive instrument." In these powerfully articulated accounts of Bruckner's Third and Fourth symphonies, Mariss Jansons exhibits that very quality.

it is right up there with the very best versions of the past. Jansons seems to have an innate ability to get just the right tempos - where nothing hurries but neither does it drag – so important in Bruckner where the phrases go on for such a long time as passages gradually build and then decline. The balance is superb, the brass sound is rich rather than cutting and the strings sing lustrously throughout.