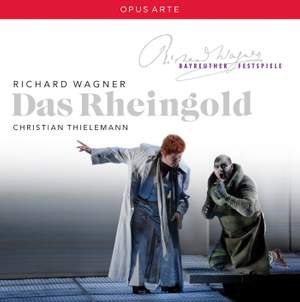 Christian Thielemann must surely be counted amongst the finest current Wagner conductors, and this 2008 live Rheingold from Bayreuth shows why. It's paced perfectly, and he draws some fantastic... — James Longstaffe, Presto Classical, March 2015 More…

Das Rheingold is the first part of Wagner's epic four-opera cycle – a work of extraordinary scale. Based loosely on characters from the Norse sagas, it is a work that follows the struggles of gods, heroes, mythical creatures, and the eponymous magical Ring that grants dominion over the entire world. The music is richly textured, and grows in complexity as the cycle proceeds - Wagner wrote for an orchestra of gargantuan proportions, including a greatly enlarged brass section with new instruments invented especially for the work. The Bayreuth Festspielhaus was constructed for this work to be performed in, with a specially designed stage that allows singers voices to blend with the huge orchestra without straining - essential for such long performances.

Recorded live at the Bayreuth Festival in 2008, this production stars a host of international stars including Michelle Breedt, Albert Dohmen, and Hans-Peter König. Christian Thielemann, one of the most soughtafter conductors in the world, takes the baton with the Bayreuth Festival Orchestra.

‘Whatever one's take on the production, Mr. Thielemann drew a probing, radiant and exhilarating musical performance from this orchestra of dedicated instrumentalists’ New York Times

Christian Thielemann must surely be counted amongst the finest current Wagner conductors, and this 2008 live Rheingold from Bayreuth shows why. It's paced perfectly, and he draws some fantastic sounds from the orchestra (not least from the splendidly warm Wagner tubas at the start of Scene Two). The cast is impeccable.