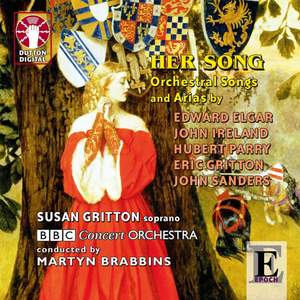 Throughout Gritton is musically purposeful… while Martyn Brabbins and the BBC players do a fine job. — BBC Music Magazine, October 2009, 4 out of 5 stars More…

Elgar: The wind at dawn

Elgar: There Are Seven That Pull the Thread

Sanders, J D: Evening on Severn No. 4 from ‘Gloucestershire Visions’

Ireland: I Have Twelve Oxen

Susan Gritton’s solo recital with the BBC Concert Orchestra and Martyn Brabbins is focussed on orchestral songs by Elgar and John Ireland, varied with delightful solo items by Susan’s grandfather Eric Gritton, by John Sanders, and an aria from Parry’s opera ‘Guenever’, here orchestrated by Jeremy Dibble. This is an enchanting and pioneering survey, with ten Elgar orchestral songs ringingly presented and crowned by Susan Gritton’s affecting reading of The Sun Goeth Down from ‘The Kingdom’. This is the first time so substantial a survey of Elgar’s orchestral songs has been presented in one programme. The song by Eric Gritton, O Stay, Madonna, is a ripe example of lyrical Edwardiana and contrasts nicely with John Sanders’ atmospherically floated Evening on Severn, and Parry’s affecting but stoutly written aria for Queen Guenever facing death at the stake. In contrast there are two groups of John Ireland songs, nine in all, each especially eloquent when heard with orchestral accompaniment. They include the title song Her Song of 1925, which makes a touching lyrical foil to Elgar’s exuberance.

Throughout Gritton is musically purposeful… while Martyn Brabbins and the BBC players do a fine job.

…performances are all one could hope for. Susan Gritton brings resplendent tone and intelligent observation to the task in hand, and she receives bright-eyed sensitive support from the BBC Concert Orchestra under Martyn Brabbins.