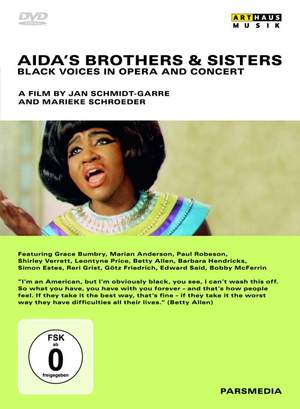 Black Voices in Opera and Concert

There are more female than male voices, but most of the great black American singers are here in interview and musical extracts. The story of combating prejudice is traced with quiet dignity. — BBC Music Magazine, November 2009, 4 out of 5 stars More…

A Film by Jan Schmidt-Garre and Marieke Schroeder.

Intriguing documentary about black singers of classical music set against the background of black emancipation in politics and society in the US.

Think of today‘s top operatic voices, and black owners of them are as likely to come into the list as white ones: Willard White, Jessye Norman and Kathleen Battle to name only three. We know it wasn‘t always thus - Paul Robeson‘s struggles to be recognised as a great singer, instead of a black singer, went on for many decades. But this programme reveals just how hard the journey to acceptance of America‘s black singers has been. It opens with one of the greatest voices of the 20th century: Marian Anderson and a clip of her magnifi cent performance of ‚Ave Maria‘. The film offers newsreel footage from her landmark 1939 concert at the Lincoln Memorial, which was held after the Daughters of the American Revolution denied her access to their Constitution Hall venue. But the black tradition of classical singing goes back even further: Before Leontye Price, Jessye Norman and even before Marian Anderson, Sissieretta Jones was arguably the greatest black performer of 19th century America and certainly the first great black diva. Sissieretta Jones , the ‚Black Patti‘, an allusion to Italian-American primadonna Adelina Patti, performed before four American presidents, mesmerized critics and audiences alike and was so successful that at one concert in New Jersey 1,000 visitors had to be turned away. The film Aida‘s Brothers and Sisters intends to focus the viewer‘s gaze particularly on the black classic and also on the fascinating mixed forms that have developed from the confrontation of white and black music in the last hundred years. The encounter with the powerful personalities of the singers and their music will reveal the humour, the lust for life, and the spiritual depth of black culture, and will perhaps add a dash of colour to a white fin de siècle culture that is in danger of contracting anaemia. A fascinating documentary with historical and contemporary film and video records of performances by Leontyne Price, Simon Estes, Grace Bumbry, Reri Grist and many others.

There are more female than male voices, but most of the great black American singers are here in interview and musical extracts. The story of combating prejudice is traced with quiet dignity.

…the history of black singers overcoming racism and prejudice is mostly told by the singers themselves, Shirley Verrett, Reri Grist and Grace Bumbry in particular… The film's tour of the issues such as what makes a black voice allows for a brief excursion on what might make a black opera: the debate over Porgy and Bess is crystallised by Edward Said, for whom it's "condescending", and Bobby McFerrin, with his praise for Gershwin's attempt to "understand the black experience".