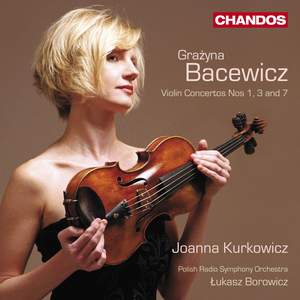 …Bacewicz… reveals a strong personality… the value and originality of what she did achieve is very well conveyed by Joanna Kurkowicz's polished yet passionate playing, backed to the hilt in slightly... — Gramophone Magazine, Awards Issue 2009 More…

The year 2009 marks the 100th anniversary of the birth of Grazyna Bacewicz. She was regarded by Witold Lutoslawski as ‘a distinguished Polish composer of the twentieth century and one of the foremost women composers of all time’. Bridging the gap between the neo-romanticism of Karol Szymanowski and the modernism of Witold Lutoslawski, she certainly deserves much wider recognition than she has received to date outside of her native country of Poland.

The Polish-born violinist Joanna Kurkowicz has previously made a rare recording of Bacewicz’s works for violin and piano on Chandos; which was enthusiastically received. ‘This is music which demands disciplined virtuosity, such as Joanna Kurkowicz has in spades”, wrote Gramophone, while American Record Guide commented, ‘Lovers of fiddle music really can’t have too much of Grazyna Bacewicz’.

Joanna Kurkowicz writes on the current project: ‘For me personally, this recording project is a celebration of a supremely talented composer… My sincere hope is that generations of violinists, teachers and critics will be attracted to Grazyna Bacewicz’s œuvre – especially the violin concertos – and that the quality and originality of Bacewicz’s works will secure them the acclaim they so richly deserve, and their rightful place among the masterpieces of the repertoire.’ About the repertoire on this disc she says: ‘The idea of the present recording, of bringing together Violin Concertos Nos 1, 3 and 7, came to me after the simple realisation that these fabulous works for violin belong among the masterpieces of the violin repertoire… Written by a violinist who knew the technical challenges of the instrument, these works are indeed difficult. But at the same time they seem natural and convey musical ideas with absolute clarity… [Bacewicz’s] choices of sonorities, articulations, tempos – even fingerings – in the musical text suggest a deep understanding of the instrument, which draws me even closer to [the] music.’

…Bacewicz… reveals a strong personality… the value and originality of what she did achieve is very well conveyed by Joanna Kurkowicz's polished yet passionate playing, backed to the hilt in slightly over-resonant but texturally lucid recordings.

A generation younger than Szymanowski and half a generation older than Lutoslawski and Panufnik, Grazyna Bacewicz is a revered figure in Polish music. The orchestral heart of her output as a composer is the seven concertos she wrote for her own instrument, the violin, and as this superbly played selection from them shows, they are wonderfully idiomatic works, colourfully scored and always interesting formally.