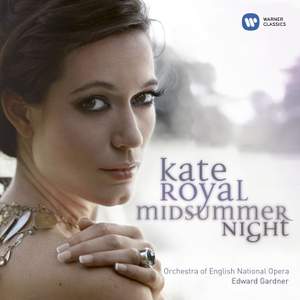 …Kate Royal's lustrous soprano has invited comparisons with that of Elisabeth Schwarzkopf, and so it does in this imaginative programme, conducted by fellow wunderkind Edward Gardner. — BBC Music Magazine, June 2009, 4 out of 5 stars More…

Walton: Troilus and Cressida, Act 2 Scene 1: "At the haunted end of the day" (Cressida)

Floyd, C: Susannah, Act 2 Scene 3: "The trees on the mountains are cold" (Susannah)

Herrmann, B: Wuthering Heights, Act 2: "I have dreamt in my life dreams" (Catherine)

Recording of the Week,  A&R and Kate Royal's Midsummer Night

"[My] Inspiration for this album began with Benjamin Britten's The Turn of the Screw and the Governess - my first major role in a 20th century opera,” said Kate Royal. “The music got under my skin in a way I had not experienced before. Britten's vocal writing is immediate and naturally dramatic. His harmonic world seeps into the subconscious underpinning the character as a fully formed human being rather than a romantic stereotype. So, with the Governess’s Tower Scene as a starting point, I went in search of other arias that shared this combination of intensity and abandon. These are worlds in which the heroines are laid bare, vulnerable in their journey towards emotional fulfilment … women lost in love [or] trapped in a deeper trance-like state as they wrestle with their unsated desires. … Alongside some of the century's seminal works I [was] also delighted to discover what I believe to be some hidden gems for the soprano voice."

Stephen Johns, Vice President of A&R, EMI Classics, has also commented on the choice of repertoire, "The selection of songs for this recital is illuminated by their composers’ reactions to the changing musical scenes of the 20th century. All the arias were written after 1900, but each composer has found a different and unique way of coping with the transition into the century. Some are still firmly rooted in the lush harmonies of the 19th century like Dvorák and Korngold; some even clinging onto the innocence of the past world, such as Léhar. Others are experimenting with newer harmonies - the exoticism of early Stravinsky, and the aching beauty of Walton and Alwyn's music. Still others find new life in the old harmonic structures - Britten and Floyd. What binds them together, in a programme that coincidentally emphasises the nocturnal, the close of the day, is a desire to allow the soprano voice fully to express beauty in melody ….”

Among the lesser known arias on Kate Royal’s CD are those from operas by the English composer William Alwyn and American composers Bernard Herrmann and Carlisle Floyd: William Alwyn (1905-1985) based his only major opera, Miss Julie, on August Strindberg’s tense and intimate drama of class and sexual relations from 1888. Composed between 1973 and 1976, Miss Julie was premiered on BBC Radio in 1977, but has had only one semi-professional stage production, in Copenhagen in 1991; Bernard Herrmann’s many film scores, notably his collaborations with Orson Welles (Citizen Kane), Alfred Hitchcock (Psycho) and Martin Scorsese (Taxi Driver), have diverted attention from his other musical achievements. He was particularly proud of Wuthering Heights, his major opera to a libretto by Lucille Fletcher (his first wife), based on Emily Brontë’s novel. Herrmann (1911-1975) composed it between 1943 and 1951, but the opera was not staged until 1982, seven years after his death; The American composer Carlisle Floyd (b 1926), whose own version of Wuthering Heights was premiered in 1958, has produced a steady stream of operas over a period of fifty years, a couple of which have become staples of the American repertoire. His greatest success has been Susannah, based on the story in the Apocrypha of Susannah and the Elders translated to a contemporary Bible-belt setting. First staged at Florida University in 1955, the opera has been performed predominantly by American companies, notably the Metropolitan Opera in 1999.

"She is a natural communicator, has all the ingredients for an important career – musicality, a lyric soprano of rare loveliness, a poised and dignified manner and looks gorgeous too" The Sunday Times

…Kate Royal's lustrous soprano has invited comparisons with that of Elisabeth Schwarzkopf, and so it does in this imaginative programme, conducted by fellow wunderkind Edward Gardner.

Dramatically, she and the orchestra capture the early evening atmosphere with its unsettling undercurrents. Vocally, her voice is so lusciously rich there is a mezzo quality to it; her diction is crystal clear, and her top register effortless, pure and true...Royal seems to have a particular gift for getting to the heart of any text, becoming the character and making it her own.

Listening to Royal is like being thrown back to a bygone age when singers didn't merely perform roles, they became indivisible from them.

All the extracts from English and American works go extremely well; the aria that gives the disc its title, "Midsummer Night" from William Alwyn's Miss Julie, is a rarity. The Tower scene from the Turn of the Screw, with its spooky woodwind and harp accompaniment, is as good as the Grimes scene - Royal comes into her own in the Britten roles.

Solos from Britten’s Paul Bunyan, Peter Grimes and The Turn of the Screw are dotted among extracts from Alwyn’s Miss Julie, Carlisle Floyd’s Susannah, Walton’s Troilus and Bernard Herrmann’s Wuthering Heights. If Royal’s voice sounds squeezed at the top of her range, she revels in this lush music.

Much of the music is pensive, decorated with birdlike flutes and piccolos or the plink of a refined harp — details brightly supplied by the Orchestra of English National Opera and their conductor Edward Gardner. But Royal’s voice is the best instrument of all: a voice of strong, liquid beauty, unfaltering in any register, never more thrilling than when pealing or gliding in long breaths.