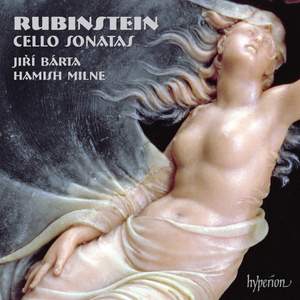 …Sonata No. 1 in D major is well-nigh irresistible, with memorable melodies and a heroic piano part sweeping all before it. In Jirí Bárta's hands it speaks to us across the centuries with a... — BBC Music Magazine, June 2009, 4 out of 5 stars More…

Remembered today principally as one of the greatest of all nineteenth-century piano virtuosos, Rubinstein was also a celebrated composer in his day who produced a large number of works with an enviable ease and fluency. His two Cello Sonatas are recorded here by Czech cellist Jirí Bárta and Romantic specialist Hamish Milne on a thoroughly enjoyable new disc.

Rubinstein was only in his early twenties when he composed the Cello Sonata No 1 in D major Op 18 in 1852, but it is a fairly substantial work which not unnaturally requires a pianist of heroic stature as well as a first-rate cellist. If Rubinstein’s idiom is more reminiscent of Mendelssohn than Russian folk-melody, he still contrives to sound a personal note with touches of Slavic ardour. The Cello Sonata No 2 in G major Op 39 was composed in 1857, though Rubinstein revised it some years later. This is a larger, more ambitious conception than the D major sonata, with a true scherzo and slow movement as well as sonata-form first movement and finale. In fact, though the sonata-form outlines of the first movement are clear, the movement has fantasia-like aspects, developing episodes that concentrate on one motif or another, and with cadenza-like effusions for the two instruments at different times. The cello’s opening theme is generously long-spanned, almost Brahmsian.

The repertoire of nineteenth-century cello music is rich, but not so extensive that these two sonatas by Rubinstein should continue to be so neglected. They are both delightful works, and the second sonata especially deserves a regular place in recital programmes.

…Sonata No. 1 in D major is well-nigh irresistible, with memorable melodies and a heroic piano part sweeping all before it. In Jirí Bárta's hands it speaks to us across the centuries with a radiant ardour.

Committed performances bring out the best in this fluent, easy-flowing music.