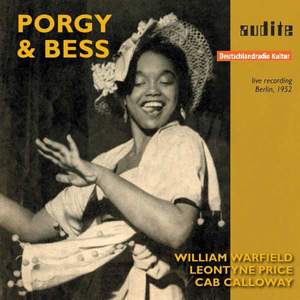 Flawed as it is, this astonishingly vivid off-air recording conveys the excitement of a classical touring production featuring one of the 20th century’s greatest voices at the start of her career. — Gramophone Magazine, March 2019 More…

Porgy and Bess, George Gershwin’s only opera, the masterwork of American music theatre, had to fight hard on its way to its German audience as it was ostracised as “nigger music” in the Third Reich. The blockage was only broken by the legendary production by Robert Breen which was toured first in the US and then across Europe from 1952 until 1955. The present recording documents the guest performance of the ensemble at the Berliner Festwochen 1952. The conditions were ideal: the music director, Alexander Smallens, had also conducted the New York premiere in 1935. He inspired a stellar cast of soloists to perform on the highest level. Amongst them are William Warfield, Cab Calloway and also the young Leontyne Price; this is probably the very first sound document on which she can be heard. Here is a captivating document of the highest musical and dramatic intensity, making the listener hold his breath atmospherically and dramatically from the first to the last minute. The production is part of our series „Legendary Recordings“ and bears the quality feature „1st Master Release“. This term stands for the excellent quality of archival productions at audite. For historical publications at audite are based, without exception, on the original tapes from broadcasting archives. In general these are the original analogue tapes, which attain an astonishingly high quality, even measured by today‘s standards, with their tape speed of up to 76 cm/sec. The remastering – professionally competent and sensitively applied – also uncovers previously hidden details of the interpretations. Thus, a sound of superior quality results. CD publications based on private recordings from broadcasts cannot be compared with these.

Flawed as it is, this astonishingly vivid off-air recording conveys the excitement of a classical touring production featuring one of the 20th century’s greatest voices at the start of her career.