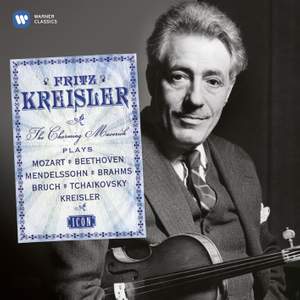 Listening to these recordings today you can hear his remarkable sound – characterised by an almost constant, but varied vibrato. He tended to avoid using his fourth finger in order to maintain... — Chris O'Reilly, Presto Music, 2nd January 2012 More…

Kreisler: String Quartet in A minor

Kreisler: Chanson Louis XIII and Pavane (In the style of Couperin)

Kreisler: Scherzo (In The Style Of Dittersdorf)

Recording of the Week,  Fritz Kreisler

Chris enjoys two tributes to the violin virtuoso and composer Fritz Kreisler, who died fifty years ago this month: a 10-CD vintage collection entitled The Charming Maverick and Liebesfreud, Liebesleid, in which his own recordings sit alongside accounts of his music by an array of great modern violinists.

Fritz Kreisler was born in Vienna in 1875. His father was Jewish and his mother a Roman Catholic. He was the youngest pupil ever to enter the Conservatoire in Vienna, where he was taught by Anton Bruckner. He then went to Paris to continue his studies with, among others, Leo Delibes and Jules Massenet.

He was 13 years old when he made his American début in New York, during his first tour of that country in 1888/1889. His début with the Berlin Philharmonic took place in 1898 and launched his international career. In 1910 he gave the premiére of Elgar's Violin Concerto, a work that was dedicated to him.

After a short period of residence in the US during World War I, he finally settled there at the outbreak of World War II, becoming a US citizen in 1943. In 1941 a traffic accident caused his hearing and eyesight to be somewhat impaired but he continued to perform, giving his final public concert in 1947, although he continued to broadcast for some time after that. He died in New York City in 1962.

Aside from being one of the great violin soloists of his time Kreisler was also a composer of some note, ascribing some of his own pastiche compositions to composers of an earlier time. When, in 1935, he revealed that these works were not written by the likes of Pugnani, Vivaldi and Tartini but were, in fact his own, he came in for a degree of critical opprobrium.

Whatever the critics might have said it cannot be denied that many of Kreisler's shorter works, some of which are included in this set of 10 CDs, are among the most popular in the classical genre. Here is an opportunity for the collector to become familiar with these works played by the master himself.

Listening to these recordings today you can hear his remarkable sound – characterised by an almost constant, but varied vibrato. He tended to avoid using his fourth finger in order to maintain his expressive sound and that gave rise to another of his notable characteristics – portamento.