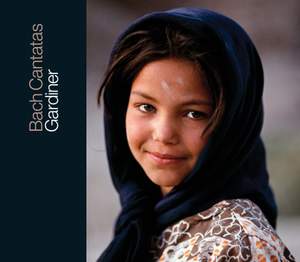 …expressive fervour and eloquent phrasing with which the excellent singers of the Monteverdi Choir infuse their performance. There are also some splendid solo contributions, notably from tenors... — BBC Music Magazine, June 2009, 4 out of 5 stars More…

As the solemn Lenten period prior to Easter approaches, Soli Deo Gloria releases the next instalment in its award-winning Bach Cantata series with a double album featuring cantatas for the second (Sexagesima) and third (Septuagesima) Sunday before Lent, recorded live in February 2000.

The programme opens with Bach’s first Leipzig cycle, BWV 144 Nimm, was dein ist, und gehe hin. Following the magnificent bold and uncompromising opening, the moral of the cantata is beautifully portrayed in Murre nicht, lieber Christ - an aria set as a minuet for alto over a pulsating string accompaniment to represent the mutterings of dissatisfied Christians.

In contrast, the engaging five-movement work for solo soprano, oboe and strings, BWV 84 Ich bin vergnügt mit meinem Glücke, has no mention of the disgruntled work-force, but only of being ‘content with my good fortune that dear God bestows on me.’ Gardiner stresses this sentiment by making the choir sing the final chorale Ich leb indes in dir vergnüget (‘I live meanwhile content in thee’) a cappella and quietly.

We then head to Southwell Minster for the three Cantatas for Sexagesima. The first two focus upon the Gospel theme of the day, the parable of the sower (Luke 8: 4-15) Superbly exemplified in BWV 18 Gleichwie der Regen und Schnee vom Himmel fällt where Bach adds two extra viola parts to the score. The magically dark-hued sonority four violas bring stresses the overwhelming power of the Word and forms ‘an ideal seed-bed in which God’s word may germinate and prosper.’

…expressive fervour and eloquent phrasing with which the excellent singers of the Monteverdi Choir infuse their performance. There are also some splendid solo contributions, notably from tenors James Oxley and James Gilchrist and basses Jonathan Brown and Stephen Loges.

The weeks leading up to Lent carry a preparatory message which unifies these latest Pilgrimage cantatas: namely, one of expressing gratitude for spiritual blessings and – as specifically articulated in the wonderful minuet alto aria of the first work, BWV144 – the robust exhortation to 'be happy with your lot and get going'.
Gardiner's rapt performances launch themselves magnificently from the 'standing start' (as he aptly calls it) of the above-mentioned piece, whose opening chorus is stripped of all indul- Vocal JS Bach 80 gence, in both setting and rendering, to the unequivocal aggression of 'Erhalt uns', via the emotional extremes in the chorale cantata, Ichhab in Gottes Herz und Sinn, whose muscular hymn by Paul Gerhardt is worked over by Bach in juxtapositions of extraordinary range.
Then, on a more reflective note, comes the solo soprano cantata Ich bin vernügt, receiving a measured, rhetorically questing reading from Miah Persson. If not instantly radiant, this is terrific Bach-singing and Persson extends her fine contribution with a wonderfully moving 'Meinem Hirten', the last aria in No 92: one of those irresistible vignettes of unswerving discipleship in pastoral mode.
Likewise, there are outstanding contributions from the compellingly focused James Oxley in the 'rage' aria 'Seht, seht!' ('See, see how all things snap, break, fall'), almost Schreier-like in its onomatopoeic designs, Stephan Loges's suitably avaricious and pettifogging representation of those who 'devour the seed' in No 181 and the invigorated Monteverdi Choir extending the conceit, in No 126, in perhaps the most angry piece Bach ever composed. Spoiling for a fight, 'fending off murderous Papists and Turks' – an odd sentiment to be conveying in these ecumenical times – Gardiner's forces are on splendid form in another exceptional volume.

…Gardiner's forces are on splendid form in another exceptional volume.

Strong interpretations, with fine choral work in this set of cantatas for Trinity. …the pick of the crop - certainly in choral terms - is the sensational and woefully little-known Es wartet, BWV187, whose opening canvas is strikingly extensive.

Fine performances all round, but the palm as ever has to go to Bach himself: the amazing central fresco of BWV 18 is far more dramatic than most operas of the time.