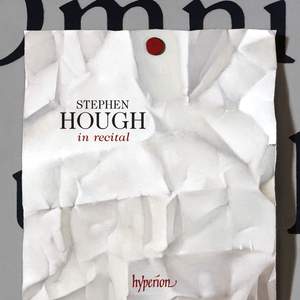 The Mendelssohn Variations come over as truly 'sérieuses', on a par with anything by his friend Schumann, thanks to Hough's vivid characterisation and dramatic flair. And if the 'Arietta' of... — BBC Music Magazine, April 2009, 4 out of 5 stars More…

The Hough discography is enhanced by this delightful recital disc from the winner of the Gramophone Gold Disc Award, acclaimed recently as ‘Britain’s finest pianist’ (Sunday Times), and as one of the six greatest pianists performing in the world today (The Guardian).

The selection of works reflects a concert programme which Stephen performed all round the world in the 2007/8 season, with a quirkily-addressed theme of Variations and Waltzes. These appear in many guises: for instance the ‘first half’ concludes with Beethoven’s Piano Sonata No 32 in C minor, with its extraordinary set of variations in the second movement. Then Stephen takes the listener on a whirlwind tour of the waltz, performing some of the triumphs of the genre with his trademark immaculate polish and unerring style. The disc ends with some typical Hough whimsy—as ever, utterly charming and full of surprises.

The Mendelssohn Variations come over as truly 'sérieuses', on a par with anything by his friend Schumann, thanks to Hough's vivid characterisation and dramatic flair. And if the 'Arietta' of the Beethoven Sonata does not quite reach this level, it is partly because an over-brightness in the treble lends a somewhat strenuous edge to some of the loudest passages. But Hough's control of the different stands is little short of miraculous.

The menu for this sumptuous banquet, with its tasty hors d'oeuvre, substantial classic dish as the main course followed by a variety of unexpected and nourishing desserts, is perfectly balanced – enough to fill you without being bloated, and nothing that is hard to chew or liable to give you indigestion. But it is the different wines accompanying each course that make this meal special, that is to say the discriminating premier cru tone, touch (what magically hushed pianissimos) and masterly pedalling to which the diners are treated, each element adjusted to each composer yet all unmistakably Stephen Hough – vintage Hough at that, for here is a pianist at the height of his powers.
This is the sort of programme and style of playing redolent of the so-called Golden Age of Rachmaninov, Hofmann, Godowsky, Cortot et al but which, in this earnest urtext era, is encountered all too infrequently. The Mendelssohn (with some seriously brisk tempi – try variations Nos 8 and 9) and a taut, crisply articulated account of Beethoven's Op 111 explore two aspects of variation form.
The 'second half' is devoted to waltz time, beginning with Weber's pioneering Invitation (1819), the earliest work in this recital. For some unaccountable reason it is rarely heard in its original form these days. Hough's is at his finest – exuberant, seductive and scintillating by turns with the repeats (all are given) subtly varied second time round. After two delectably suave Chopin waltzes, Hough offers three contrasted Gallic takes on 3/4 time, imbuing each with the kind of affection and charm for which Cherkassky was famous. After this he cleverly takes us gently by the ear via Liszt's nostalgic Valseoubliée No 1 to the pianistic diablerie of his Mephisto Waltz No 1. Rounding off this masterclass is Hough's own witty transformation of Waltzing Matilda from its normal duple time to triple time. A great piano recording.

…(what magically hushed pianissimos) and masterly pedalling… each element adjusted to each composer yet all unmistakably Stephen Hough - vintage Hough at that, for here is a pianist at the height of his powers. The "second half" is devoted to waltz time, beginning with Weber's pioneering Invitation (1819)... Hough's is the finest performance I have ever heard... exuberant, seductive and scintillating by turns with the repeats (all are given) subtly varied second time round. A great piano recording and front runner for instrumental disc of the year.

Though labelled as "Stephen Hough in recital", this is in fact a studio-made recording, though based on a recital that Hough toured in the first half of last year. It is a typically thoughtful piece of programme building, which Hough describes as "two highly contrasting mini-recitals". Works dominated by variation form - the Mendelssohn, the Beethoven sonata - are set again a collection of pieces built around the waltz, beginning with Weber and ending with Liszt's Valse Oubliée No 1 and first Mephisto Waltz, as well as an arrangement of Hough's own, and taking in examples by Chopin, Saint-Saëns, Chabrier and Debussy en route. The selection of works highlights different aspects of Hough's own versatile pianism, too. His clear-sighted path through both the Mendelssohn and Beethoven, every detail perfectly placed, belies the charm he brings to the bravura glitter of the Weber, the subtle ambiguities of Debussy's La Plus que Lente, and the more insidious allure of the Liszt. It's a beautifully accomplished sequence.