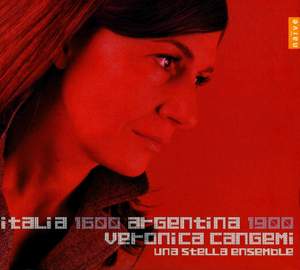 Verónica Cangemi was born in Mendoza, Argentina and was a cellist in the Mendoza Symphonic Orchestra before winning both the National Singing Competition in Argentina and the Francisco Viñas Competition in Barcelona. Her first European performance was in Gluck’s Armide with Les Musiciens du Louvre. She has concentrated largely on Mozart and the Baroque repertoire, working with such directors and ensembles as Giovanni Antonini, Ivor Bolton, William Christie, Adam Fischer, Nikolaus Harnoncourt, René Jacobs, Ton Koopman, Sir Neville Marriner and Zubin Mehta.

The Baroque pieces on the album contain highly virtuosic music by composers like Nicola Porpora that would have been performed by the great castrato Farinelli, as well as arias by Vivaldi and Handel renowned for their challenging vocal lines. The Latin flavour of the disc is complemented by the inclusion of 20th century pieces by Piazzolla, Guastavino and Villa-Lobos all of whom hail from Cangemi’s native South America.