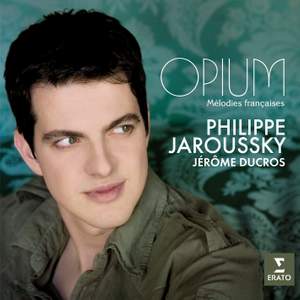 Philippe Jaroussky has a wide pitch range and absolute control throughout, with no tenseness at the top of hooting at the bottom, and his floated high notes are ravishing. Jérôme Ducros's accompanying... — BBC Music Magazine, April 2009, 4 out of 5 stars More…

Unsurprisingly, it is in the music of the Baroque era – the heyday of the castrato – that French countertenor Philippe Jaroussky has captured the attention of music-lovers lovers around the world. The ethereal, but sensuous beauty of his voice, his virtuosity and his sense of style have brought him critical praise, a number of major awards – including, in 2008, Germany’s prestigious Echo-Klassik prize for Male Singer of the Year, honouring his Virgin Classics album, Carestini: The Story of a Castrato – and impressive sales: more than 120,000 copies of his Vivaldi album Heroes and 90,000 of the Carestini release.

Jaroussky enters new territory with this programme of French songs from the late 19th and early 20th centuries – well over a hundred years after the end of the Baroque era. Taking its name, Opium, from a song by Saint-Saëns, it evokes the voluptuous, sometimes decadent spirit of the Belle Époque, the era of transition between Romanticism and Modernism. The programme includes a number of rarities by composers such as Dukas, Caplet, and Chaminade, as well as better-known numbers by figures like Fauré, Chausson and Hahn.

“Many people will probably wonder why a counter tenor should sing these songs,” says Jaroussky, “but if you think about it, the countertenor voice as such has no repertoire of its own, except the modern music written specifically for it. For the most part we sing music written for castratos who – as we know – had very different voices from ours. So why not venture into other musical worlds if we feel they are suited to our voices? … There has been David Daniels in Schubert, Max Emmanuel Cencic in Rossini, and even Andreas Scholl and Gérard Lesne in pop music.

“I’ve always felt a special affinity for French song, which was an area of focus in the early days of my studies with my teacher, Nicole Fallien. It was Renaud Capuçon -- whom I want to thank, along with Gautier Capuçon and Emmanuel Pahud for his valuable contribution to this disc -- who first had the idea of inviting me to sing Hahn, Chausson, Fauré in a recital. It was then that I met the pianist Jérôme Ducros, and we decided to work further on this rich and well-stocked repertoire, which contains some real undiscovered treasures. There is no theme to this album, but I wanted to record songs which have captured my heart and which suit my voice. Perhaps I can show them in a new light too.”

French song demands an acute sense of language and style, and today there are relatively few singers --- even native Francophones – who succeed in capturing its elusive magic. “I’ve decided to pronounce the texts in a way that is as close as possible to the spoken word – I don’t roll the ‘r’, for example,” continues Jaroussky. “The poetry should come to life without the imposition of too much interpretation or emotional contrivance. I’ve tried to approach it with humility.”

"Philippe Jaroussky is one of the best countertenors around. His voice is mellow, evenly toned, wide-ranging and largely free from intrusive mannerism and vocal strain” BBC Music Magazine, February 2007

Philippe Jaroussky has a wide pitch range and absolute control throughout, with no tenseness at the top of hooting at the bottom, and his floated high notes are ravishing. Jérôme Ducros's accompanying is some of the best I have heard.

His repertoire is fabulous, mixing gold star favourites with striking curios by non-song composers such as Dukas. The instrumental back-up from Jerome Ducros, the Capuçon brothers and Emmanuel Pahud is superb.