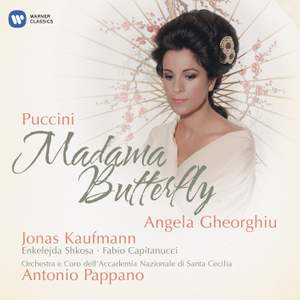 In many respects Gheorghiu's singing reminds me of Callas's: in Act I they both adopt a 'little girl' voice, and in Act II they both sound more mature… so that by the tragic climax they present... — BBC Music Magazine, April 2009, 4 out of 5 stars More…

Recording of the Week,  Angela Gheorghiu in Puccini's Madama Butterfly

The Romanian soprano assumes the role of the tragic teenage geisha for the first time, with Jonas Kaufmann as the American naval officer who abandons her, and Antonio Pappano conducting.

Madama Butterfly appears on EMI Classics for the first time in many years in a new studio recording. The role of Cio-Cio-San is stunningly performed by Angela Gheorghiu, partnered by the exciting young German tenor Jonas Kaufmann as her lover Pinkerton, both making their debuts in these roles. Suzuki is sung by Enkelejda Shkosa, Sharpless by Fabio Capitanucci and Goro by Gregory Bonfatti. Antonio Pappano conducts the Orchestra e Coro dell’Accademia Nazionale di Santa Cecilia in the two-act opera. The recording took place in the Santa Cecilia Hall of the Accademia Nazionale di Santa Cecilia in Rome in July 2008, the year commemorating the 150th anniversary of Puccini’s birth.

Angela Gheorghiu, commenting at the conclusion of the recording sessions, said, “It is the culmination of a long-held dream for me to record the role of Cio-Cio-San. Puccini’s music always touches me very deeply. In Madama Butterfly, as in all his operas, Puccini shows a great understanding of how human beings, and especially women, think and feel. Working together with Tony Pappano, Jonas Kaufmann and the rest of the cast in this recording has been a great joy.”

In many respects Gheorghiu's singing reminds me of Callas's: in Act I they both adopt a 'little girl' voice, and in Act II they both sound more mature… so that by the tragic climax they present a strong personality in full possession of her destiny. This is Gheorghiu's greatest achievement on disc. Jonas Kaufmann as the winning, faithless Pinkerton is on tremendous form, too...

Jonas Kaufmann makes Pinkerton an attractive creature of instinct and youth rather than a callous egotist.

Gheorghiu somehow conveys not only the depth of Butterfly's love but also her inner knowledge that, in fact, her belief in Pinkerton's devotion is hopeless. This is a mature interpretation which suggests strength above all, so that the touches of vulnerability are added with subtlety. ...Jonas Kaufmann is an ardent Pinkerton... Enkelejda Shkosa is a vivid Suzuki and Fabio Capitanucci the sympathetic Sharpless. ...Antonio Pappano takes a less driven and melodramatic way with the score than Karajan in his three recordings; it's nearer in mood to Barbirolli... though there is no lack of passion at the great climaxes - just listen to the spine-tingling moment of the sighting of the ship.

a resounding success. Pappano's natural feeling for the phrasing and dynamic shading of Puccini's great melodies is here enhanced by having an Italian chorus and orchestra...Un bel di has rarely been so richly or securely sung in a complete Butterfly...[Kaufmann] seems totally comfortable in the Italian text and, like Gheorghiu, brings out many detailed subtleties...an excellent choice in a very competitive field.

Gheorghiu sings beautifully with a lovely softness about her voice, which means that she can create the vulnerability and fragility of the role very effectively. She also seems to have balanced the deep love that her character has for Pinkerton, with the inner knowledge that such devotion is ultimately hopeless. The rest of the cast are equally excellent with Jonas Kaufmann’s Pinkerton particularly outstanding, and all are superbly supported by conductor Antonio Pappano and the Accademia di Santa Cecilia.

For me, the main attraction of this set, wonderfully conducted by Antonio Pappano, is Jonas Kaufmann as Pinkerton. Glorious of tone throughout, his duet with Angela Gheorghiu at the end of Act One is ravishing. Gheorghiu herself is wistfully emotional in Un bel dì and affectingly tragic in Tu, tu piccolo Iddio.

A German tenor might have been a controversial choice for the caddish Lieutenant Pinkerton in Puccini’s Japanese tragedy, but Kaufmann’s dark, ringing tenor gives greater substance than usual to this shadowy, unsympathetic role, and his Italian is idiomatic.

A highly polished performance of Puccini's sublime masterpiece made in Rome over 12 days in the old slow-burn, multi-take style. It is very impressive in many respects, not least because of the ideal clarity and warmth of the sound engineering. Antonio Pappano conducts the Santa Cecilia Orchestra with red-blooded passion, never letting the pace slip but remaining attentive to the finer orchestral detail on the way.

You can't fault her diligence, nor the rest of the cast's dramatic flair. Jonas Kaufmann's husky Pinkerton is excellent; if he skimps on ardour, that's because Butterfly's fake husband is more in lust than love. Enkelejda Shkosa contributes a moving Suzuki; Fabio Capitanucci a more spontaneous and less censorious Sharpless than usual. But Pappano is the icing on the cake.