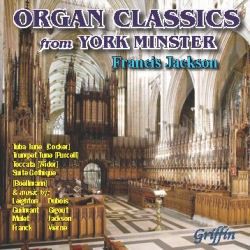 These famous York Minster demonstration pieces were originally recorded by the legendary EMI engineer Brian Culverhouse, particularly renowned for organ recordings & series over the years. They have never before been issued on CD & feature Dr Francis Jackson, noted particularly as an interpreter here of the French Romantic school. "He exults in the unabashed exuberance of much French organ music." — The Times (London)