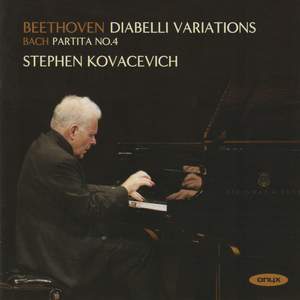 Kovacevich brings penetrating insight and a thrilling physical involvement. From the outset there is a driving momentum and crispness of articulation, and the bristling energy of so many variations... — BBC Music Magazine, February 2009, 5 out of 5 stars More…

Very special release indeed, the return after more than 40 years to the piece that first brought him worldwide fame – Stephen Kovacevich in Beethoven’s Diabelli Variations.

In the 90s Stephen recorded the complete Beethoven Sonatas for EMI for the first time, and the set is one of the standard recommendations. Yet something was missing and this recording completes the cycle, which for Kovacevich has become a true life-cycle, having given his sensational Wigmore Hall debut with this piece in 1961 and recording it in a still-classic version for Philips in 1968.

His conception has changed – it has a more live quality (despite being a studio recording) and more dramatic - quite simply it’s picks you up and sweeps you along irresistibly to the very end. Some of the most profound Beethoven playing ever put on disc!

As a generous bonus comes his first ever Bach recording, a concert favourite of his, Bach’s Partita no 4 which provides a wonderful palate-cleanser after the emotional rollercoaster of the Diabelli!

Kovacevich brings penetrating insight and a thrilling physical involvement. From the outset there is a driving momentum and crispness of articulation, and the bristling energy of so many variations makes the slower ones stand out in compelling relief, without needing especially slow tempos... one of the most impressive things about this new recording is the powerful feeling of live music-making. It is alive and spontaneous, and the overall physical and emotional sweep here is exciting and enormously fulfilling.

It's certainly faster than his own earlier recording. But more important is the sense that Kovacevich has now encompassed the extremes of the work more fully. His understanding of Beethoven's juxtapositions of beauty and crudity, reflection and action, and the sheer dynamic range, are fully exposed in this new version, which captures the piano sound beautifully. A disc to treasure.

[The Diabellis are] custom built for Kovacevich. Nothing this artist does is less than compelling