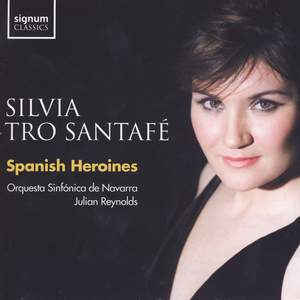 an impressive voice and sound vocal technique….I should welcome a disc of Handel arias and/or a Rossini recital from her — International Record Review

Silvia Tro Santafé is a new name in the world of opera that is sure to become well-known by the end of 2009. The Spanish mezzo-soprano has already appeared in many of the world's leading opera houses, including the Deutsche Oper Berlin, Salzburg Festival,Vienna State Opera, Netherlands Opera, La Monnaie Brussels, the Liceu, Barcelona and at the Zurich Opera. Her debut performance at La Monnaie in La Cenerentola was met with great praise. On this strong debut disc with Signum, she performs arias of the greatest operatic Spanish Heroines, drawing from favourite works by Bizet, Rossini, Massenet, Mozart,Verdi and Donizetti.

an impressive voice and sound vocal technique….I should welcome a disc of Handel arias and/or a Rossini recital from her