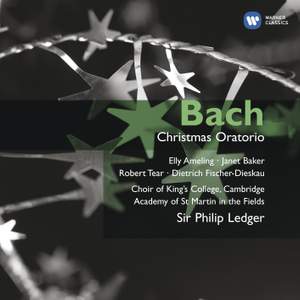 Was will der Höllen Schrecken nun

Johann Sebastian Bach performed his Christmas Oratorio during the festive season 1734/5 in Leipzig. It does not conform to the usual meaning of the word Oratorio in that it is not a single self-contained work but is split into six sections or cantatas for six different services between Christmas Day and Epiphany, indeed the soloists and instrumentalists employed are varied thus enforcing the view that Bach did not expect all six to be performed in one evening concert. There is the usual blend of choruses and chorales for the choir with arias and recitatives for the soloists with the Tenor also allocated the role of Evangelist.

This recording, featuring the choir of King’s College, Cambridge, together with soloists closely associated with the works of the composer and of international renown, took place in July and December 1976 in King’s College Chapel with the Academy of St. Martin in the Fields under the direction of the Sir Philip Ledger, the then College musical director

Recorded in the mid-1970s at King's College Cambridge, this is definitely a 'vintage' Christmas Oratorio. Soloists Elly Ameling, Janet Baker, Robert Tear and Dietrich Fischer-Dieskau are on top form, and Philip Ledger's reading of the work brings out its majestic gravitas.