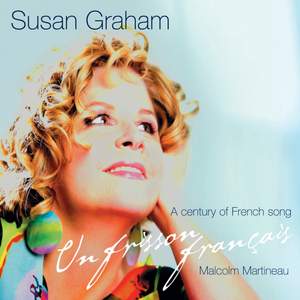 The familiar here appears in unusual contexts and alongside a scattering of rarities. The performers are at one in their fluency, delicate rubato and avoidance of Anglo-Saxon archness, within... — BBC Music Magazine, November 2008, 5 out of 5 stars More…

Undoubtedly ONYX’s highlight of the year is the first recital disc for 5 years by the great American mezzo Susan Graham. Beloved by audiences the world over, this outstanding recording is sure to be much in demand worldwide.

The unique programme provides a celebration of French song in an unusual way – instead of groups of songs by several composers Susan has opted for a single song by 22 different composers from Bizet to Poulenc. This is the programme she and Malcolm Martineau her regular accompanist took on tour in the USA and Europe in 2007/2008. Reviews were unanimous “confirms Susan Graham as the ideal package she is” (Music Web) “resistance is futile” (New York Times); superb, exquisite (Chicago Tribune)

Susan Graham is particularly at home in French repertoire, one of the few non-French singers recognised by the French themselves when they made her a Commandeur dans L’Ordre des Arts et des Lettres. Susan refutes the idea that all French vocal music sounds the same: "This programme has everything: loud, soft, high, low, fast, slow, romantic, acidic."

Includes some surprises- Saint-Saëns’ Danse Macabre for example, known by everyone as a orchestral showpiece but in fact first written as a song, but hardly ever performed as such; and some favourites such as Hahn’s À Chloris and Canteloube’s Brezairola, but far more discoveries such as the gorgeous Psyché by Paladilhe and Bachelet’s ecstatic Chère Nuit.

The familiar here appears in unusual contexts and alongside a scattering of rarities. The performers are at one in their fluency, delicate rubato and avoidance of Anglo-Saxon archness, within an acoustic that combines intimacy and atmosphere.

With Susan Graham in radiant form and Malcolm Martineau not just an accompanist but an active partner in the project, 'Un frisson français' offers a unique survey of French mélodie from the mid–19th century to the mid–20th: 22 songs…one per composer.
Martineau describes the plan as a 'tasting menu', starting with Gounod, to whom he ascribes the launching of the genre of French mélodie. Even Ravel said that Gounod was 'the true founder of the mélodie in France' and his song 'Au rossignol' ('To the Nightingale') is included in the first of five sections – 'founding fathers', including Bizet, Franck, Lalo and Saint–Saëns. It is fascinating to hear the original version with piano of 'Danse macabre', Graham marvellously biting.
Martineau describes the sequence as 'loosely chronological', and one beauty of the scheme is that rare and forgotten composers are included, such as Paladilhe and Bachelet who are represented in late–Romantic mélodies with night and nature dominating themes. The third group – including Ravel and Debussy – takes us into the 20th century. Especially fascinating is André Caplet's setting of 'Le corbeau et le renard' ('The Crow and the Fox') with elaborate piano accompaniment.
Only rare songs are chosen for each composer and perhaps Martineau chose some of them for the colourful accompaniments, as in Chausson's fluttering accompaniment for his picture of the butterfly in 'Le papillon'. The fourth section has childhood as a common theme and the climactic section has only one song, much the longest, Poulenc's 'La dame de Monte-Carlo', to words by Jean Cocteau. It is like an encapsulated version of the operatic monodrama La voix humaine with the singer on the verge of a breakdown.
A rich collection in excellent sound: no one is likely to be disappointed.

With Susan Graham in radiant form and Malcolm Martineau not just an accompanist but an active partner in the project, "Un frisson français" offers a unique survey of French mélodie from the mid-19th century to the mid-20th: 22 songs… one composer. A rich collection in excellent sound: no one is likely to be disappointed.