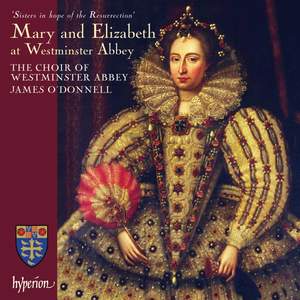 Mary and Elizabeth at Westminster Abbey

Sisters in Hope of the Resurrection

The brilliance of the programming matches that of the singing. By ranging lesser-known works, such as Mundy's, alongside familiar music such as William Byrd's anthems, we can appreciate how... — BBC Music Magazine, March 2009, 5 out of 5 stars More…

Our second October release from Westminster Abbey tells the story of the religious and political turmoil that engulfed England in the sixteenth century, and from which composers of liturgical music could find no escape. They were forced to follow the changing edicts about permitted texts as the pendulum of power oscillated between traditional and reformed religion. Interestingly, this period saw the greatest flowering of church music in England’s history; some of the most magnificent works of the age are recorded here.

November 1558 is the chronological centrepoint of this disc. The first half of the programme consists of music performed (not necessarily in all cases composed) during Mary’s reign; the second half, beginning with the evening canticles from Sheppard’s Second Service, explores something of the immense variety of sacred music produced during the subsequent, much longer and more celebrated reign of Mary’s Protestant half-sister.

The brilliance of the programming matches that of the singing. By ranging lesser-known works, such as Mundy's, alongside familiar music such as William Byrd's anthems, we can appreciate how foreign and original were the new styles of church composition under Queen Elizabeth.

Following the success in the Gramophone Awards of the Choir of New College, Oxford, this first–rate survey of old favourites suggests that collegiate institutions such as these continue to enjoy rude health, fears to the contrary notwithstanding.
Conceived as a memorial to two royal sisters buried in the Abbey, it includes some wonderfully strong singing from boy trebles. As ever, their tone conforms to the 'house style', clearer and brighter than that of Edward Higginbottom's but with no hint of shrillness.
Undoubtedly the most impressive achievement here is Mundy's Vox Patris caelestis, which looks a rather unwieldy, sprawling thing on paper (and sounds it in some performances); here it is convincing formally, and the cohesion of the ensemble forces admiration, as indeed does the trebles' athleticism and stamina. For this alone this disc warrants the strongest recommendation.

Undoubtedly the most impressive achievement here is Mundy's Vox Patris caelestis… the cohesion of the ensemble forces admiration, as indeed does the trebles' athleticism and stamina. I'd also single out Nicholas Trapp, the treble solo in Byrd's Teach me, O Lord, and the choir as a whole in the opening and closing numbers... As a showcase for English choral singing at its most charismatic, this deserves to be widely heard.