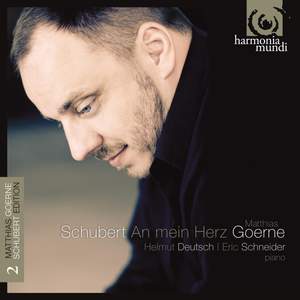 Goerne… and Schneider offer grave and solemn performances of Goethe's Mignon and Harper songs, before ending on a higher note, celebrating the eternal joy of love in 'Willkommen and Abschied'. — BBC Music Magazine, February 2009, 4 out of 5 stars More…

Matthias Goerne has received worldwide praise for his warm, fluid baritone and his profound interpretations. Highly respected as a Lieder singer, he is a frequent guest at renowned festivals and prestigious venues like the Carnegie and Wigmore Halls. From 2008 to 2011, Matthias Goerne will perform and record Schubert on 11 CDs for harmonia mundi and important venues all over the world will present the complete series of Schubert recitals with Matthias Goerne in their coming seasons. This second volume speaks of death, of the 'Wanderer', and of the relationship between Schubert and his poets .

. . For this occasion the singer has called on two travelling companions who have left a lasting artistic impression on the world of lieder: Eric Schneider and Helmut Deutsch.

Helmut Deutsch's career as a song accompanist began with Irmgard Seefried; he spent twelve years in an intensive collaboration with Hermann Prey, and has been the partner of many other celebrated singers. Eric Schneider has appeared notably with Christine Schäfer, Matthias Goerne, Christiane Oelze and Stephan Genz. He is a regular guest with these partners at the Schwarzenberg Schubertiade, Salzburg Festival and the Tanglewood Summer Music Festival.

Goerne… and Schneider offer grave and solemn performances of Goethe's Mignon and Harper songs, before ending on a higher note, celebrating the eternal joy of love in 'Willkommen and Abschied'.

Battered by Bryn Terfel dramatics, the ears cried out for a pure dose of lieder from a master of the craft. Matthias Goerne… seems to own a different shade of baritonal colour for every syllable Schubert wrote. The voice is sweet and serene, even at fff, and
the shifts that Goerne applies to the changing of seasons and the fickleness of love are done with enviable delicacy. More reticent than Fischer-Dieskau or Thomas Quasthoff to bend a line for expressive
emphasis, when Goerne takes a liberty the effect is breath stopping… T his is not an album to gorge at one go. Take it two songs a night before bedtime, and it might see you through to the end of recession.

Norman Lebrecht CD of the Week

Here elegy, fatalism and death-longing predominate and in such repertoire Goerne's mellow, darkly rounded timbre, expressive diction and care – rare in Lieder singers today – for a true, 'bound' line are well nigh ideal. Even at the most anguished fortissimo, his tone never grows harsh or hectoring. Perfectionism like Goerne's has inevitably provoked charges of over-calculation.
Some might protest at the ultra-slow tempo for Du bist die Ruh. Yet Goerne's beauty of tone and phrasing (founded on seemingly superhuman reserves of breath), and a rapt intensity that rises to spiritual radiance in the final verse are mesmerising. At a more conventional tempo, he sings An die Musik as a simple, sincere confession of faith, with affectionate touches of rubato (and how eloquently Helmut Deutsch's left hand duets with the voice). Elsewhere Goerne's unsentimental tenderness can illuminate little-known songs that seem ordinary on the printed page – Abschied von der Harfe, say, or the quasi-operatic lament Der Sänger amFelsen. He even appropriates, successfully, two of Mignon's songs, giving one of the most desolate and – in the central section – disturbed performances of Nur wer die Sehnsucht kennt you will hear.
True to form, Goerne makes an uncommonly melancholy serenader in An die Laute and DesMädchens Liebeslauschen, which never smiles. Yet he can lighten up, as in the story-telling of DerFischer and Wie Ulfru fischt. Like Deutsch on the first disc, Eric Schneider fully matches Goerne in acumen and command of colour, not least in a performance of Nachtstück of mingled grandeur, mystery and compassionate gentleness.

Goerne used to record for Decca, but it apparently had no interest in his 12-volume Schubert compendium, so the less ruthlessly commercial Harmonia Mundi comes to the rescue, for which the France-based company deserves the highest praise. From a vocal point of view, few male singers,
even Fischer-Dieskau, command such a rich palette of colours as Goerne does here…he goes where Dieskau never ventured: he includes two of Mignon's songs, Heiss' mich nicht reden and Nur wer die Sehnsucht kennt, as well as the Harper trilogy… In the middle Harper song, Mayrhofer's
Nachtstück and Nähe des Geliebten (Nearness of the Beloved), Goerne approaches the sublime and captures perfectly the wry wit of Goethe's sly dig at water-nymphery, Der Fischer, in which the surprise encounter of an angler with a "moist woman" is wryly underlined by Schubert. Luxury
support from Deutsch and Schneider sets the seal on an outstanding issue.

Classical CD of the Week

Goerne's virtuoso vocal sculpting draws you into the inner landscape of each song, his warm, expressive baritone shaping detail often understated by lesser artists. This promises to be a landmark series, up there with Hans Hotter and Fischer-Dieskau.

This promises to be a landmark series, up there with Hans Hotter and Fischer-Dieskau.