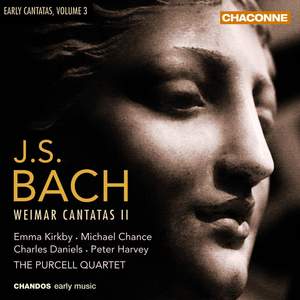 Out to impress, Bach's instrumental imagination soared in these works. …the playing is consistently rewarding, more so than the singing which at its most persuasive is ravishing, but (excepting... — BBC Music Magazine, November 2008, 4 out of 5 stars More…

This 2-CD set with The Purcell Quartet and a distinguished group of soloists is the third in a series devoted to Bach’s early cantatas and the second focussing on the Weimar period. On an earlier release, International Record Review wrote, ‘The Purcell Quartet and guests are most welcome: even the most distinguished of period performers with larger ensembles can’t achieve the intimacy that the forces here have at their disposal’.

Uniquely, but following historical precedent, The Purcell Quartet employs single voices, rather than a choir. The stance is still controversial, but recreates the works as they would have been performed originally, and therefore stands out from the more conventional approach, the product of subsequent developments of massed choral singing. Accompanied by The Purcell Quartet and their guest instrumentalists are the vocal soloists Emma Kirkby, Michael Chance, Charles Daniels and Peter Harvey. Individual vocal and instrumental lines are allowed to be heard to their full effect, which greatly enhances the impact and meaning of the cantata texts.

This programme contains three cantatas dating from 1714, the year in which Bach was promoted to the post of Konzertmeister at the ducal court in Weimar. His responsibilities now included the composition of concerted sacred vocal music, including the writing of cantatas at regular intervals for Sundays and feast days of the liturgical year. Bach performed all three works collected on this pair of discs several times. They are presented here as they would have been heard in Weimar at their 1714 performances. The first two works, Erschallet, ihr Lieder, BWV 172 and Himmelskönig, sei willkommen, BWV 182, have much in common in tone and atmosphere: both are essentially jubilant at the prospect of the heavenly eternity awaiting the good Christian at the end of his life, and the images of the Trinity led Bach to employ three trumpets in BWV 172. In BWV 182 there is, instead of trumpets and drums, an intimate conversation principally between violin and recorder. The jubilant mood of these two cantatas is juxtaposed with that of Ich hatte viel Bekümmernis, BWV 21, which exudes a feeling of despair, only for Bach to bring in trumpets and drums at the end as hope gradually begins to dawn.

The Weimar cantatas of J.S. Bach form an exceptional body of work and it is thrilling to hear them performed in a way that Bach would have recognised, and by artists respected in the early music field. We offer this set at the price of two CDs for one.

Out to impress, Bach's instrumental imagination soared in these works. …the playing is consistently rewarding, more so than the singing which at its most persuasive is ravishing, but (excepting Peter Harvey) is not without the odd hint of strain. Still there are marvellous things from all, and this version of BWV 21 sustains greater presence than Masaaki.