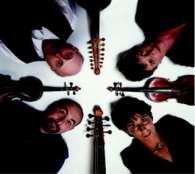 Founded in 1983, The Purcell Quartet has established itself as a leading performer of baroque music. The group has appeared all over the world, including North and South America and all the countries of Europe, and for over ten years has been a regular visitor to Japan, touring extensively with fully staged performances of Purcell’s Dido and Aeneas and Monteverdi’s L’incoronazione di Poppea and Orfeo. The Quartet has played at most of the major festivals in the United Kingdom, recorded extensively for the BBC, and toured with the Early Music Network.