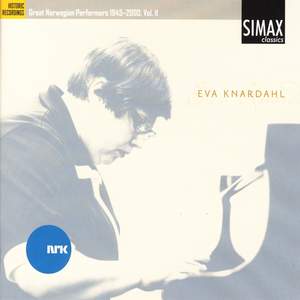 One of the most notable musicians in post-war Norway, Eva Knardahl was a vibrant and spirited figure in the musical life of the nation, performing, participating in public debate, and involving herself in various boards and committees. She was justly referred to as a breath of fresh air, both with regard to the richness of her musical expressivity, and to the manner in which she ardently defended her views.

Eva Knardahl gave her official debut recital at the age of eleven and immediately came to the attention of the Norwegian public. At her debut concert she performed no less than three piano concertos, and it was soon clear that hers was a unique gift. Following studies with, amongst others, Mary Barratt Due, in 1947 at the age of 27 she moved to the USA. In 1952 she took up the post of pianist with the Minnesota Symphony Orchestra, and soon became recognised as the foremost artist on the instrument in that area of the United States. In 1965 she was encouraged to return to her native Norway by the conductor Karsten Andersen, and the next period of her life can be divided into two sections, the first being from 1965 to 1984 when she performed as a soloist, and the second from 1984 to1994 when she held the post of professor of chamber music at the Norwegian Academy of Music. Although her repertoire as a pianist included the concertos of Brahms, Beethoven and Mozart, as a result of her time in the States, the modern American piano tradition was very much in her veins, and she was a great champion of works like Leonard Bernstein’s 2nd Symphony, “The Age of Anxiety”. Her recordings of the complete works solo piano by Grieg for BIS in the 70’s are still considered to be amongst the best.