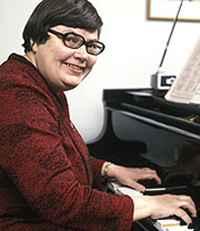 Eva Knardahl Freiwald (May 10, 1927 – September 3, 2006, Oslo) was a Norwegian pianist, with a noted career both as a child prodigy and adult performer.

Her debut with the Oslo Philharmonic Orchestra at the age of 12, in which she played three concertos (those by Johann Sebastian Bach in F minor, Joseph Haydn in D major and Carl Maria von Weber in C major), was received with rave reviews.

She emigrated at 19 to the United States, where she had a distinguished career with the Minnesota Orchestra for 15 years, before returning to Norway in 1967. She became a popular fixture on the Norwegian music scene and was named the first professor of chamber music at the Norwegian Academy of Music. Knardahl is most known for her interpretations of Grieg's piano works.

Find out more at https://en.wikipedia.org/wiki/Eva_Knardahl