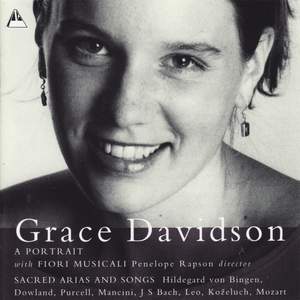 Purcell: Come, ye Song of Art away: Bid the Virtues

A new recording by the ascending British star of the early music and baroque scene. Grace Davidson’s distinctive and ethereal voice can be heard in ensemble with such groups as The Sixteen, Tenebrae, the Monteverdi Choir, the English Concert, the Gabrieli Consort, Ensemble Plus Ultra and Ex Cathedra. This is the first album devoted entirely to her own voice and features her in a range of early music repertoire from Hildegard to Mozart and is accompanied by the original instrument orchestra Fiori Musicali.

Grace Davidson takes as her canvas for this vocal portrait music ranging over 700 years of musical history, displaying a wonderful variety of musical textures and colours. From the subtle, suggestive monody of Hildegard of Bingen (the 12th-century visionary) through to the distinctive music of the Neapolitan baroque and the vivid tones of Mozart’s Exsultate, jubilate this is a musical journey portraying an outstandingly beautiful new voice. The music performed includes rarities such as Mancini, Koželuch and Leo as well as well known works by John Dowland, Bach and Mozart.