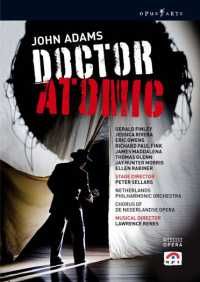 Doctor Atomic centres on the hours before the first detonation of the atomic bomb… Peter Sellars's film of the opera is expressionistic, claustrophobic, sometimes deliberately out of focus.... — BBC Music Magazine, October 2008, 5 out of 5 stars More…

The longing to overcome human boundaries led the physicist J. Robert Oppenheimer to begin an experiment that formed a threat to the whole of humanity, and whose scientific results still do today. The question of the moral implications of the atomic bomb is raised in John Adams’ opera, just as much as that of the influence on the private lives of the main characters. Doctor Atomic is the fifth work to result from almost twenty years of collaboration between the American composer and his fellow American director and Erasmus Prize-winner Peter Sellars.

Doctor Atomic centres on the hours before the first detonation of the atomic bomb… Peter Sellars's film of the opera is expressionistic, claustrophobic, sometimes deliberately out of focus. The sound quality is exceptionally good, as is the singing and playing under conductor Lawrence Renes.

is the most dramatic subject matter of any John Adams opera and musically the most inconsistent. Indeed, as subject matter goes, Doctor Atomic could hardly be more apocalyptic.
The work's principal character is J Robert Oppenheimer, the scientist who developed the atomic bomb during the Second World War from its earliest prototype through to the test bomb that was detonated in 1945 at a secret site in New Mexico. The opera's First Act takes place a month before the test; the Second Act is set on the day itself, with a finale that strategically plays with our perception of time as the bomb is about to be detonated.
Adams's first opera, Nixon in China, rattled along with a note-specific clarity that flickered like newsreel; he paints Doctor Atomic in broader brushstrokes, using post-Bernard Herrmann suspense tactics and angsty chromatic swells to portray charged emotions. But an underlying weakness is the stubbornly unmemorable and melodically colourless vocal writing, leading to one-dimensional characterisations. Adams's and librettist Peter Sellars's decision to incorporate poetry by John Donne and Muriel Rukeyser into the opera only highlights the functional flavour of Sellars's own words as the balance is flipped towards contrived artifice. No complaints about the performance though. Gerald Finley carries the problems of the world on his shoulders as Oppenheimer and the Netherlands Philharmonic and Lawrence Renes play like it's the best score since Fidelio.

Gerald Finley carries the problems of the world on his shoulders as Oppenheimer and the Netherlands Philharmonic and Lawrence Renes play like it’s the best score since Fidelio.

The heart throbs...in scenes featuring Jessica Rivera as Oppenheimer’s wife, the opera’s symbol of warmth, sensuousness, and hope. But these are moments: the overall tone stays cool, intellectual. We watch as observers, not participants.
Sellars directed this TV version himself. There are virtues here, and vices. Cinema aficionados dismayed by static shots may revel in the nervous visuals, the quick editing and close-ups (you grow very familiar with Rivera’s tongue). But by fidgeting so much, Sellars the film director often works against the interests of Sellars the stage director. Body movements are truncated; the patterns of Lucinda Childs’s choreography get lost. All too rarely do we grasp the big picture and enjoy the full impact of Adrianne Lobel’s stark sets, with desert hills silhouetted and the bomb, cradled with wires, looming overhead like a malevolent planet.
Finley, Rivera, Eric Owens and the rest of the cast are always as eloquent as the opera allows, and Lawrence Renes’s conducting is on the ball. Extras are disappointing: too much of Sellars holding forth, not enough on the production