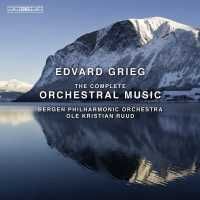 This exemplary disc also offers us an opportunity to sample Grieg’s virtues and limitations under the best possible conditions, for performances and recording are both outstanding. — Gramophone Magazine

Grieg: Before a Southern Convent Op. 20

To list the various distinctions awarded to the recordings that make up this sumptuous offering is almost impossible; suffice it to say that the entire series received the Grieg Award in 2007, the year of the hundredth anniversary of the death of the composer, as well as a very special commendation by the UK Grieg Society the same year. During 2003-2006, as the individual discs were released, reviewers all over the world were heaping praise over the series – astoundingly enough, as this is repertoire that at least in part belong to some of the most well-represented on disc. But this did not seem to matter to the critics, who described the performance of the Piano Concerto as one that ‘will make you fall in love with the music all over again’ American Record Guide and that of the Holberg Suite ‘so compelling that it simply makes you forget about any other’ Classics Today.com

This exemplary disc also offers us an opportunity to sample Grieg’s virtues and limitations under the best possible conditions, for performances and recording are both outstanding.