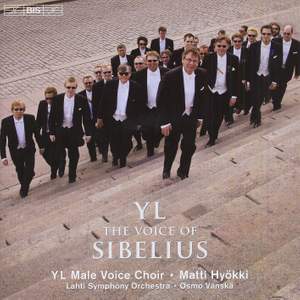 The Voice of Sibelius

I. Sortunut ääni (The Broken Voice)

Sibelius: March of the Finnish Jaeger Battalion, Op. 91a

Jaakarien marssi (March of the Finnish Jager Battalion), Op. 91a

The YL Male Voice Choir has long held a relationship with the composer Sibelius. Founded in 1883 under the auspices of the Helsinki University, Sibelius began to collaborate with the choir while studying at the conservatory in Helsinki. When the composer made his breakthrough with Kullervo in 1892, singers from YL formed the backbone of the choir, and when he started to write for male choir a cappella the following year his first work was Venematka (The Boat Journey), composed for the choir’s tenth anniversary. After that, a majority of Sibelius's most famous works for male choir were commissioned and premiered by YL, which has never ceased to be regarded as the foremost exponent of Sibelius’s music for male choir – the voice of Sibelius! The present programme includes both a cappella works and works for male choir and orchestra, in which YL is supported by Lahti Symphony Orchestra conducted by Osmo Vänskä. It takes us through a variety of moods and themes: from the brief and very moving Sydämeni laulu – a lullaby for a dead child – to Tulen synty (The Origin of Fire), a re-telling of the ancient Kalevala legend of how fire came into the world, as well as the patriotic sentiments of Vapautettu kuningatar (The Captive Queen) and, of course, the hymn from Finlandia, probably Sibelius’s most famous composition, here in a choral version.