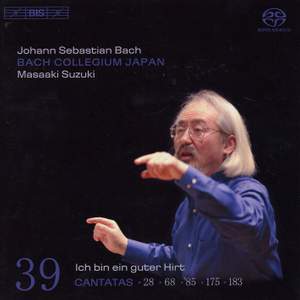 None of these five cantatas extends beyond a quarter of an hour and yet the wealth of material is brilliantly compressed in a manner which followers of Bach's chorale cantata Jahrgang, his second... — Gramophone Classical Music Guide, 2010 More…

After two volumes concentrating on solo cantatas, the full forces of Bach Collegium Japan return in this programme of five cantatas dated 1725. The choir instantly makes its presence felt in the first movement of the opening work, BWV68. This is a large-scale hymn arrangement, where the choir is supported by an orchestra featuring horn and oboes. This is followed by one of the most charming and beautiful soprano arias in all of Bach’s cantatas, Mein gläubiges Herze’, in which Carolyn Sampson shines. The five works all include, to a certain extent, unusual instrumental combinations: from the three recorders which lend a pastoral character to Er rufet seinen Schafen mit Namen, BWV175, to the wind quartet (two oboi d’amore and two oboi da caccia) appearing in Sie werden euch in den Bann tun, BWV183. The variety of timbres is further aided by the appearance of the cornet and trombones of Concerto Palatino. Gerd Türk glows in the intensely melodic tenor aria ‘Seht, was die Liebe tut’ (from BWV 85), Peter Kooij, whose bass becomes the voice of Christ in Ich bin ein guter Hirt, (BWV85). All in all, another impressive installment in this highly acclaimed cycle.

None of these five cantatas extends beyond a quarter of an hour and yet the wealth of material is brilliantly compressed in a manner which followers of Bach's chorale cantata Jahrgang, his second cycle from Trinity 1724, would have come to expect. Before the following Easter, the composer had abandoned the cycle – at least partly, one imagines, as a result of some upset with the church authorities – and resumed with the conventional model where the music takes the gospel as catalyst for poetic inspiration.
Vol 39 from Masaaki Suzuki introduces us initially to the outstanding Whit Monday cantata, No 68, Also hat Gott die Welt geliebt ('God so loved the world') in a performance of uncharacteristically ruddy complexion by Collegium Bach Japan. The siciliana rhythm is elegantly turned here but lacks intensity. Likewise, the bubbling radiance of 'Mein gläubiges Herze' ('My heart ever faithful', as early English arrangers have known it) is short of the genial joie devivre which Agnes Giebel famously brings to Fritz Werner's performance (Erato).
If the texts of Marianne von Ziegler for Nos 68, 175 and 183 (sadly, she collaborated with Bach on only nine works) afford a special luminosity of imagery which Bach clearly found profoundly arresting, Suzuki is equally committed to Neumeister's effervescent representation of God's gifts of the past year in the Christmas Cantata Gottlob!, No 28. After Carolyn Sampson's authoritative opening aria, the great motet movement on the chorale, 'Nun lob, mein Seel, den Herren', finds a happy balance between textural refinement and declamatory zeal.
These are, indeed, fine performances with notable contributions from all the soloists (and obbligato instruments – apart from some laboured violoncello piccolo playing in BWV183, albeit played on the shoulder, “da spalla”), though no single one falls into that special category where an association between work and performer is formed for instant recall.

…fine performances with notable contributions from all the soloists…

The wonderfully trim and naturally expressive period band and choir, underpinned by an exceptional group of continuo players…. High-quality Bach singing and playing.