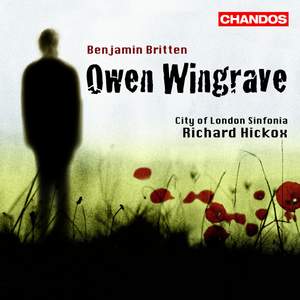 Hickox's excellent cast boasts some supreme exponents. Hickox draws haunting colours and chordings from his City of London Sinfonia, and the recording is flawlessly presented. — BBC Music Magazine, July 2008, 4 out of 5 stars More…

Act I Scene 1: You've got your maps there? (Coyle, Lechmere, Owen)

Act I Scene 1: Straight out of school they come to me (Coyle) - Interlude

Act I Scene 2: At last it's out. No doubt old Coyle will rage (Owen, Miss Wingrave, Coyle) - Interlude II: Was is the stateman's game (Owen)

Act I Scene 4: And now, to face them, all of them, the living and the dead (Owen, Mrs. Julian, Kate, Miss Wingrave)

Act II: Prologue: The Ballad: There was a boy, a Wingrave born (The Narrator, Chorus)

Act II: They called for him to toll the bell (The Narrator, Chorus) - Scene 1: The bell was for the child he slew (Owen, Coyle)

Act II Scene 1: Now you may save your scornful looks (Owen)

Following the success of his recent performance of the opera at London’s Cadagon Hall, the seasoned Britten performer Richard Hickox has committed the composer’s rarely recorded Owen Wingrave to disc. Only one rival CD recording is available at present. Commissioned by BBC television in 1966, the work is something of a Cinderella among Britten’s operas, despite its imaginative, closely knit score. One possible reason is that it was composed for television rather than the theatre. Like its 1954 predecessor, The Turn of the Screw, Owen Wingrave is based on a ghost story by Henry James. Britten read the story while he was working on The Turn of the Screw, and even then conceived the idea of setting it as an opera. The music employs the relatively spare textures that Britten adopted in his later years.

Hickox's excellent cast boasts some supreme exponents. Hickox draws haunting colours and chordings from his City of London Sinfonia, and the recording is flawlessly presented.

After experimenting with smaller-scale forms of musical theatre throughout the 1960s, Britten returned to 'grand' opera in Owen Wingrave, based on Henry James's pacifist debate about following the flag or one's conscience. Premiered as a TV commission, Wingrave enjoyed unmerited Cinderella status among Britten's stage works until the recent TV film conducted by Kent Nagano (with Gerald Finley in the title- role – see below) and an innovative stage production by Tim Hopkins at Covent Garden's Linbury Studio in 2007.
Over the years Richard Hickox has used his studio skills to telling effect in the vocal works of Britten. In this new recording following concert performances, Peter Coleman-Wright is most adept at conveying Owen's pain and troubled conscience, the while never giving way to an over-emotionalism untrue to anyone brought up in a soldier's family. Alan Opie, in what is in many ways the beau role of the military tutor Spencer Coyle, achieves both a superb neutrality and an evident empathy with Owen's decision to quit the military life. Robin Leggate avoids caricature (or simple Peter Pears homage) in the small but essential role of the family termagant, General Sir Philip Wingrave. The women are no less characterful, with an especially sympathetic reading of Coyle's wife from Janice Watson.
Throughout Wingrave, Britten's cunning reworking of rhythmic structures and harmonic devices pioneered as early as Peter Grimes reaches a new level of plasticity and sophistication.
The shimmer of orchestral sound – sometimes impressionistic, sometimes Gamelaninfluenced, sometimes wholly percussive – is a still insufficiently appreciated wonder of 1970s operatic writing. The core duets of Coyle/Wingrave, Wingrave/Lechmere and Wingrave/Kate (in which she sets the reluctant soldier the challenge of spending a night alone in the haunted room) are anchored on a sophisticated version of the tonal atonal structures on which Britten had once based The Turn of the Screw. It lends the drama an amazing tensile strength, closely parallel to the Berg operas which Britten wanted to get to know better in the 1930s but was discouraged by his teachers from approaching too closely.
The new set, in Chandos's customary natural comfortable sound, becomes the first recording in any medium to do the work full musical and dramatic justice. It should also satisfy the curiosity of those who wonder why its devotees hail Wingrave as Britten's greatest completed opera.

The new set… becomes the first recording in any medium to do the work full musical and dramatic justice. It should also satisfy the curiosity of those who wonder why its devotees hail Wingrave as Britten's greatest completed opera.

Hickox and his cast make the strongest possible case for the opera: Peter Coleman-Wright’s eloquent, idealistic Owen might seem mature casting, but there are fine cameos from Alan Opie (Owen’s tutor), Robin Leggate (the General) and James Gilchrist (Lechmere). Pamela Helen Stephen’s Kate is not as bitchy as Janet Baker’s, Elizabeth Connell’s Miss Wingrave not quite as formidable as Sylvia Fisher’s strident, domineering portrait, but both sing well.

this recording advances as a good a case for the opera as anyone could reasonably expect. The cast, headed by Peter Coleman-Wright as the haunted, compromised Owen Wingrave, is strong, and the gallery of English eccentrics/grotesques that make up the extended Wingrave family is vividly depicted.

Richard Hickox's command of the score...banishes once and for all the idea that the work was a mere appendix to the composer's operatic career: its pacifist theme was a central one to Britten's creative being, and he invested the opera with all the musical richness and textural originality of an unrivalled master of the medium, best expressed here in the playing of the City of London Sinfonia, which is wonderfully alive.

This excellent recording by Hickox and the City of London Sinfonia conjures shimmering life into oft-ignored episodes of brilliant musical characterisation. The stand-out in a first-class cast is James Gilchrist's Lechmere, full of eager innocence, loyalty and vim.