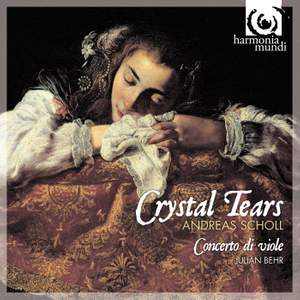 There is some magical singing here, and Scholl is supported by instrumental playing of rare subtlety and real finesse. — BBC Music Magazine, July 2008, 4 out of 5 stars More…

Dowland: The Lady Rich her galliard

Johnson, R: Have you seen the bright lily grow?

Byrd: Though Amaryllis dance in green

The German countertenor captivates in a programme of lute and consort songs by the great Elizabethan ‘poet of melancholy’, John Dowland, with lutenist Julian Behr and Swiss-based viol quartet Concerto di Viole.

There are few pleasures more delightful than musical melancholy, especially when it flows from the pen of the finest Elizabethan poets and a composer whose name will be forever associated with that emotion: John Dowland. His lute songs and consort songs form the backbone of Andreas Scholl's latest recital.

The countertenor has gathered his favourite partners around him in the service of this sublime vocal art, elegantly distilling its fragile instants of grace.The songs are adroitly interspersed with instrumental pieces by Dowland's contemporaries.

Bonus DVD NTSC: a performance of the song 'Venus' birds' and a documentary on the making of this recording.Trailers available on harmoniamundi.com & Youtube.

Since it was founded in Basel in 1989, Concerto di Viole has played as a permanent ensemble. Its four members all studied at the Schola Cantorum Basiliensis and each individual brings to it rich musical experience with well-known international ensembles.They have recorded a number of CDs including German Baroque cantatas with Andreas Scholl for harmonia mundi in 1998.

There is some magical singing here, and Scholl is supported by instrumental playing of rare subtlety and real finesse.

Inevitably, Andreas Scholl gets the headline treatment, though the man himself seems very much a team player. And though there are a few quibbles with his approach to this repertory, his interaction with Concerto di Viole and lutenist Julian Behr carries great conviction. The choice of Dowland songs holds few surprises. Although Scholl's technique is unimpeachable, his tone polished beyond doubt, there's a surprising diffidence.
Dowland's melancholy may have been a genuine personality trait but the Elizabethan penchant for this most intractable of humours was also (as Scholl acknowledges) a wider social phenomenon, a fashionable affectation; and from an artist of Scholl's accomplishment, a tauter balance between demure reserve and theatricality would have been welcome. Otherwise, one runs the risk of a one–dimensional Dowland, and Scholl doesn't entirely avoids it here.
That said, the first track, 'Go crystal tears', makes for a fine opening, and in 'Go nightly cares' the dialogue between voice and viols is very impressive. The whistling in the refrain of John Bennett's 'Venus' birds' seems the wrong sort of affectation, and the portamenti in the refrain of Byrd's 'Though Amaryllis dance in green' are likewise overdone.
The gems here are the pieces by lesser–known composers, in which Scholl's reserve is perhaps less of an issue: Robert Johnson's 'Have you seen the bright lily grow?' is particularly moving, and movingly conveyed, with something of the languor of the air de cour. Concerto di Viole's contributions are stylish, and Behr is both a sensitive accompanist and a distinguished soloist (in 'Semper Dowland semper dolens'). On a bonus DVD there's a short documentary that faithfully captures the atmosphere of a recording session, in which Scholl comes across as a down-to-earth, reflective and genuinely charming person.

Scholl's technique is unimpeachable, his tone polished beyond doubt…

There is surely no voice more ethereal-sounding among contemporary falsettists than Scholl’s, and he lavishes a ravishingly beautiful sound on the Dowland “hits”: Go, crystal tears; Now, oh now, I needs must part; From silent night; Come, heavy sleep. The danger of monotony is averted with the interspersing of viol Fantasias by John Ward and Richard Mico, and of Dowland’s lute solos, Semper Dowland, Semper Dolens, The Lady Rich, Her Galliard and A Fancy, exquisitely played by Julian Behr. For fans of both Dowland and Scholl, this is a collector’s item.

The exquisite melancholy pervading the disc, and its companion DVD, is the perfect balm to beguile you through a wistful summer evening

Since this is a collection dominated by John Dowland's consort songs, sobs and melancholy lie at its heart. But with Scholl's alto brand of counter-tenor floating the lines, polishing the vowels so beautifully, the sorrow never quite feels real. Occasionally he's too loud and hooty, and more than once monotonous. But Venus Birds is irresistible, he dies very nicely in Oh Death, Rock Me to Sleep, and he is always surrounded by succulent sounds from the lutenist Julian Behr. Even with the whistling and instrumental tracks, the variety of mood and texture remains limited - but who goes to Dowland to frolic?