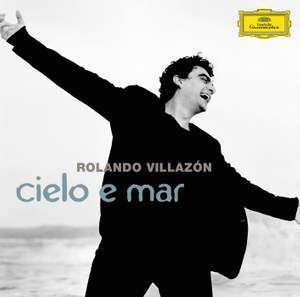 This is a well chosen selection of tenor arias with a few comparative rarities to offset the more obvious favourites. In its way it is a mini-history of a century of Italian opera, from Donizetti's... — Gramophone Classical Music Guide, 2010 More…

Exuberant and charismatic, Rolando Villazón is the tenor of today. Here he releases his first solo album on Deutsche Grammophon. The soaring title track from Ponchielli’s La Gioconda inspired Villazón to become a singer. Here it is the starting point for an intriguing album which moves far beyond the usual “greatest tenor hits”. Less familiar masterpieces by Boito, Cilea and Verdi feature alongside little-known Donizetti arias and rarities by Gomes, Mercadante and Pietri. The album is Villazón’s personal homage to his illustrious predecessors in the lyric-dramatic repertoire – great tenors such as Bergonzi, Caruso and Domingo. Cielo e mar offers something special for connoisseurs of opera, Villazón’s many fans and mainstream listeners who will be gripped by the beauty of both his voice and the music.

This is a well chosen selection of tenor arias with a few comparative rarities to offset the more obvious favourites. In its way it is a mini-history of a century of Italian opera, from Donizetti's Poliuto (1838) to Pietri's Maristella (1934). The Donizetti is the longest item and well though Villazón copes with this, it's hard to imagine him in this part, beloved of tenore di forza of the past including Tamagno and Corelli. In fact he has not sung any of these roles on stage yet; in a note he explains that the repertory here is something 'with more spontaneity…without the burden of history'.
Be that as it may, the parts for which he would seem to be destined are Gabriele Adorno in Simon Boccanegra, Rodolfo in Luisa Miller and Viscardo in Il giuramento. Mercadante's opera is based on the same Victor Hugo play as Ponchielli's La Gioconda, so it is a good idea to contrast these two very different interpretations of the same character.
The little romanza from Pietri's opera is the only piece by him that we ever get to hear. It was a favourite with Gigli, and several other tenors have recorded it. The aria from Brazilian composer Carlos Gomes's 1873 opera Fosca is a highvoltage outpouring of emotion, as is the aria for Azael in Ponchielli's Il figliuol prodigo.
Villazón sings them all with admirable intensity, his diction is excellent, and he can float a pianissimo when necessary, as in the opening 'Cielo e mar' from La Gioconda that gives the disc its title. Recording quality is first–rate, and the accompaniment is always sympathetic.

Villazón sings with admirable intensity, his diction is excellent, and he can float a pianissimo when necessary. The aria from Boccanegra is one of the best things Villazón has done so far on the disc.

Villazon needs no special pleading for the glory of his voice (a dark, baritonal timbre that opens out thrillingly at the top) and his intensity as a performer is captured here as never before. An odd hint of strain in the Boccanegra and Poliuto items suggest he should think carefully before tackling the tenor parts from these operas in the theatre, but the rest is pure gold.

This anthology's title track, 'Cielo e mar!', comes from Ponchielli's La Gioconda, the opera that first inspired this thrilling tenor to become a singer. It gets Villazon's first solo album for DG off to a sizzling start, continued with standard fare from Verdi, Boito and Cilea. But there are also rarities, from composers such as Mercadante and Pietri.

In glorious voice, Villazón identifies ardently with each of these dreamy or distraught Romantic heroes. His familiar no-holds-barred intensity can occasionally misfire, as in a rather relentless account of a once-popular serenade from Pietri's Maristella. But far more often he compels with his thrilling, darkly burnished tone, generous phrasing and care for legato and shading.