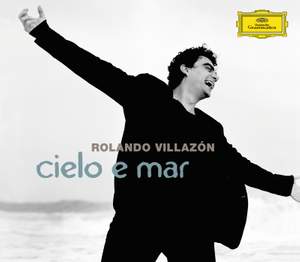 Exuberant and charismatic, Rolando Villazón is the tenor of today. Here he releases his first solo album on Deutsche Grammophon. The soaring title track from Ponchielli’s La Gioconda inspired Villazón to become a singer. Here it is the starting point for an intriguing album which moves far beyond the usual “greatest tenor hits”. Less familiar masterpieces by Boito, Cilea and Verdi feature alongside little-known Donizetti arias and rarities by Gomes, Mercadante and Pietri. The album is Villazón’s personal homage to his illustrious predecessors in the lyric-dramatic repertoire – great tenors such as Bergonzi, Caruso and Domingo. Cielo e mar offers something special for connoisseurs of opera, Villazón’s many fans and mainstream listeners who will be gripped by the beauty of both his voice and the music.