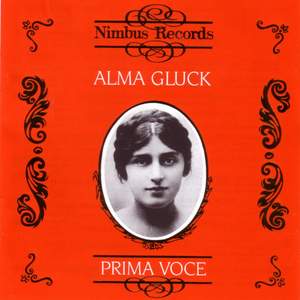 Jonson: Have You Seen but a Whyte Lillie Grow (Recorded 1913)

Song of the Shepherd Lehl (Recorded 1911)

Alma Gluck was born in Bucharest but moved as a child to America. She made her début in the New Theatre, New York, in 1909, followed almost immediately by her début at the Met as Sophie in Werther. In 1912, even though she was already an established lyric soprano, she made the time to travel to Paris and study with the famous Jean de Reszke, following this in 1913 with a long course of study under the great diva of the previous generation Marcella Sembrich. This Prima Voce release provides an insight into both her stage and concert career as well as a memento of the most important partnership in her life, that with the violinist Efrem Zimbalist.