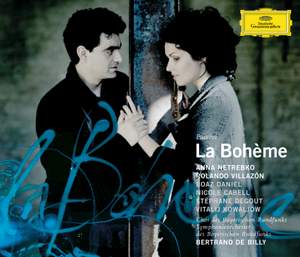 As Rodolfo, Rolando Villazón is magnificent, by turns ardent and angry and there's a stream of bright golden tone in a ringing 'O soave fanciulla'. — BBC Music Magazine, May 2008, 3 out of 5 stars More…

Recording of the Week,  A La Bohème for all

Anna Netrebko is the Parisian seamstress with the cold hands and Rolando Villazón is the poet who finds her door-key on this new recording from Bertrand de Billy and the Bavarian Radio Symphony Orchestra.

A sparkling recording of Puccini’s La Bohème, recorded live at the Gasteig in Munich, under studio-like conditions. In three concert performances in April 2007, Anna Netrebko, Rolando Villazón, Nicole Cabell, Boaz Daniel and conductor Bertrand de Billy generated a special chemistry. This is a cast with youth on its side, so there is real credibility to Puccini’s story of bohemians in Paris. Emotion, spontaneity, intensity: Puccini’s beloved opera demands them all. The audience had the rare chance to experience magic being created; a sensation that has been captured in this live but studio-like recording

As Rodolfo, Rolando Villazón is magnificent, by turns ardent and angry and there's a stream of bright golden tone in a ringing 'O soave fanciulla'.

Villazòn is nigh-on impossible to fault. His sure-footed tenor has a wonderfully vulnerable edge. He clothes the most painful dramatic moments in tears, and the effect is heart-stopping; dripping in Puccinian melodrama and every-bit musical.

Vividly recorded, vigorously conducted and sung by a distinguished cast still in their relatively youthful prime, it presents the score with an appeal that will be readily felt by newcomers and with a freshness that will make those of riper years feel… well, feel young again.
Act 1 moves quickly up to Mimì's entry. The vigour is not brash or wearing; there are moments of respite, but it is conducted as a symphonic unit, a first-movement allegro giocoso. The love music takes its natural pace, though it adds a silent beat immediately following Mimì's solo and another before the start of 'O soave fanciulla'.
The Second Act registers clearly as a symphonic scherzo, or, in this arrangement where you play the first CD without a break, as an extended Mozartian finale. The various elements – the main solo group, the Christmas Eve crowd, the children (in splendidly disciplined high spirits), the stage band – are all well defined and the great ensemble runs its joyful course so that we can almost feel ourselves to be part of it.
Among the singers, it is important that Marcello has the presence and gaiety to be the life and soul and Boaz Daniel has all of that. Stéphane Degout as Schaunard may be a little too like him for the purposes of the recording but is lively and stylish. The Colline, Vitalij Kowaljow, is less effective. The lovers Anna Netrebko and Rolando Villazón are a famous pair and deservedly so. His voice is richly distinctive, his style genial and ardent. Netrebko is pure-toned and ample in climaxes. As Musetta, Nicole Cabell shows many of the qualities of a well cast Mimì – might Netrebko (a little solid and sturdy in vocal character for the Mimì of these acts) not have made a brilliant Musetta, as Welitsch did? In the remaining acts no such qualms arise.
Netrebko sings with feeling and imagination and Villazón is an inspired, golden-voiced Rodolfo. In fact, these are as finely performed as in any recording. The orchestra play almost as though reading a supplementary libretto, so vivid is their commentary. This is a recording which takes its place alongside the acknowledged 'classics'.

Vividly recorded, vigorously conducted and sung by a distinguished cast still in their relatively youthful prime … This is a recording which takes its place alongside the acknowledged 'classics'.

This new DG recording is surely the La Boheme for our time. The singing of the two stars...is unforgettable. One needs to say little more, except that Nicole Cabell as Musetta and Boaz Daniel as Marcello are equally memorable.

There is...some fine singing to be heard, all from Rolando Villazón, whose Rodolfo is irresistibly ardent and sustained on a wonderfully burnished tone. But Anna Netrebko, the other half of the much-vaunted dream pairing, is detached and profoundly unmoving as Mimi; there's no colour in the voice and no dramatic credibility in her relationship with Rodolfo, although the way in which the recording spotlights each voice destroys all theatricality anyway. The coarse-grained efforts of the Musetta (Nicole Cabell) and the Marcello (Boaz Daniel) to grab their share of the spotlight only make things worse. Some of the tempos that Bertrand de Billy adopts suggests he was trying to get things over as soon as possible.

Any frisson between the lovers is supplied by Rolando Villazón's impassioned, impulsive, gloriously sung Rodolfo. Fellow Bohemians Marcello and Schaunard are lively and quick-witted, though Colline tends to wobble in his "coat" aria. Nicole Cabell sings with gusto in Musetta's irresistible waltz song.
Without short-changing the moments of extreme tenderness and pathos, De Billy conducts with youthful ardour and an acute feeling for the score's variegated colours. All the more frustrating, then, that Netrebko's Mimì bears only a sketchy resemblance to Puccini's "soave fanciulla".

It is succulently dramatic – a tribute both to the stars’ power and the conductor Bertrand de Billy’s dramatic ability to steer the score at the drop of a note from uproarious jollity to the shiver that spells death.
Villazón, of course, comes up to the mike first, bustling through the opening garret scene with an electricity that immediately separates him from Boaz Daniel’s Marcello and the other bohemian chums. Villazón’s Rodolfo radiates Latin heat throughout: every mood, from ripping bravado through tender concern to abject loss, is vigorously yet tastefully conveyed.
Frailty may not be Netrebko’s middle name, but she dampens her force sufficiently to be fairly convincing...Finding the right balance between Mimì’s ill health and a diva’s lung power is never easy: Netrebko comes closest in her impressive D’onde lieta in Act III.