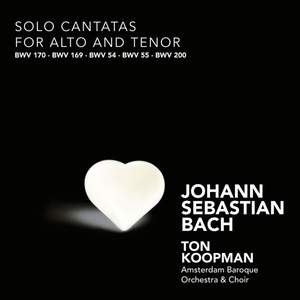 J.S. Bach wrote several cantatas that feature a particular solo voice. The selection on this CD, which has been taken from the award-winning cycle by Ton Koopman and the Amsterdam Baroque Orchestra and Choir are for alto and tenor. The alto solo cantata “Vergnügte Ruh, beliebte Seelenlust” BWV 170 was written for the 6th Sunday after Trinity and first performed on 28 July 1726. Bach took its text from a collection by Georg Christian Lehms, whose sacred poetry he had previously utilised in Weimar. The alto solo cantata “Gott soll allein mein Herze haben” BWV 169 was premiered on the 18th Sunday after Trinity, 20 October 1726. The anonymous text is based on the Gospel for that Sunday, Matthew 22: 34-46, (“love thy neighbour”). “Widerstehe doch der Sünde” BWV 54, written for the 3rd Sunday in Lent, was performed in Weimar on 4 March 1714, but probably originated in 1713 or earlier. The words are by the librettist of BWV 170. Georg Christian Lehms, The piece represents in all likelihood Bach’s first example of a solo cantata. The tenor solo cantata “Ich armer Mensch, ich Sündenknecht” BWV 55 for the 22nd Sunday after Trinity was first performed on 17 November 1726. The anonymous text refers to the Sunday’s Gospel, Matthew 18: 23-35 (parable of the unmerciful servant). The alto aria “Bekennen will ich seinen Namen” BWV 200 represents a fragment from a cantata whose other movements are completely unknown.