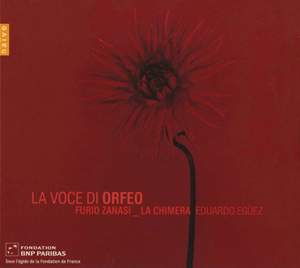 Early music specialist, baritone Furio Zanasi and La Chimera pay tribute to the Italian singer, Francesco Rasi (1574-1621), one of the most fascinating musicians produced by the early Baroque era in Italy.

The programme devised by La Chimera is organised in three sections, each of them representing one of the amatory conditions that Francesco Rasi regularly treated in the works he sang or composed. Francesco Rasi (1574-1621), poet, composer and singer, quickly established a reputation as an exceptional singer and a virtuoso exponent of the lute. His love of travelling saw him meet outstanding musicians including: Luca Marenzio, Jacapo Peri, Marco da Gagliano and Claudio Monteverdi. His splendid vocal talents in turn influenced these great composers, creating, for example, the title role in Monteverdi’s ‘Orfeo’.

La Chimera was formed in 2001 as a viol ensemble by Sabina Colonna-Preti. Since meeting Eduardo Egüez and Quito Gato it has turned into a complete baroque ensemble.