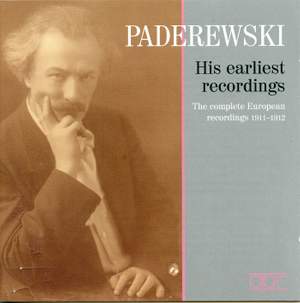 There are many wonderful, even matchless, performances here that, in addition, provide a welcome antidote to the text-before-personality cult that prevails today. When you listen to Paderewski... — Gramophone Magazine, May 2008 More…

Paderewski was perhaps the most famous, and certainly the most highly paid, pianist who ever lived. In the years between 1890 and the First World War his fame reached levels now only reserved for the biggest pop stars and when he became prime-minister of Poland after the end of the war his deification was complete. He resumed his career in the 1920’s and continued to perform until his death. Unfortunately most of his recordings were made later in life and do not capture his playing in its prime, a fact which has somewhat damaged his posthumous reputation, so it is particularly important that these earliest recordings, which can redress the balance, are made available complete for the first time. This is playing very different in style from what we are used to today, but aside from its historic importance, taken on its own terms it is quite clear what a great communicator Padereswki was. And it’s good to be reminded in works like Liszt’s La Leggierezza study that at this point in his career there was nothing lacking in technique either.

Several titles included are taken from Paderewski’s own test pressings of unissued discs held at the International Piano Archive, University of Maryland, and this is their first release. A must for collectors!

There are many wonderful, even matchless, performances here that, in addition, provide a welcome antidote to the text-before-personality cult that prevails today. When you listen to Paderewski the pianist you are also experiencing Paderewski the man.